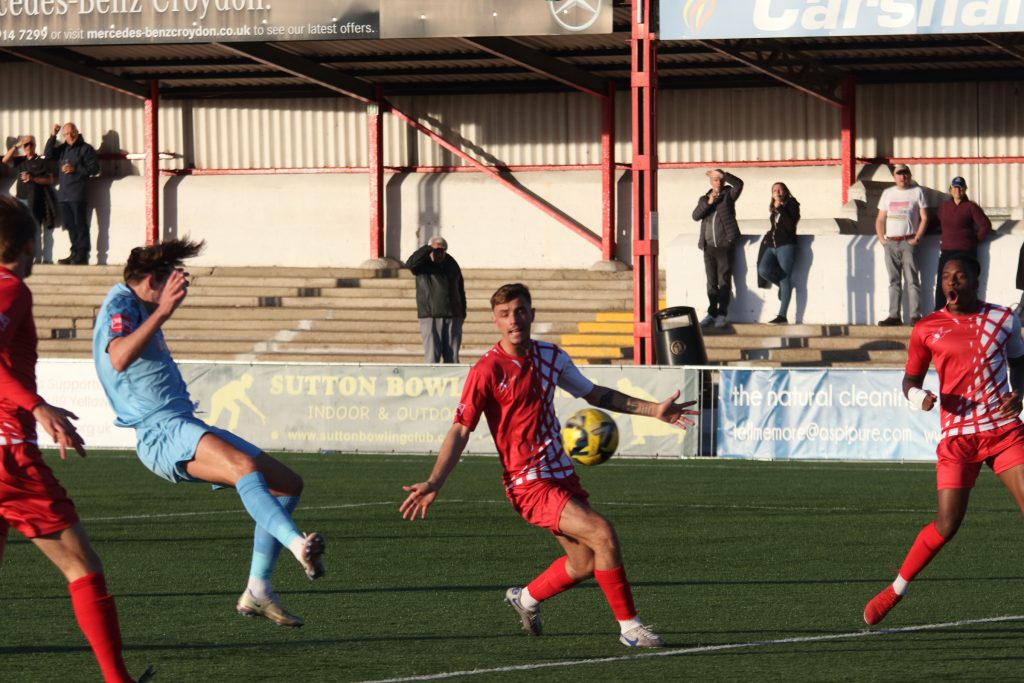 A solid, professional performance, combined with some charitable donations from the home defence, saw Enfield Town bank a comfortable three points at in-form Carshalton and move up to fourth.

With Anthony Wordsworth making a first start in midfield, Town started brightly, and raced into a two- goal lead in the opening 22 minutes.

Town made good use of the low sun that rendered visibility difficult for the entire first half, and first benefited after six minutes.  Lyle Della Verde’s cross from the right disappeared into the sun, and then reappeared for Sam Youngs to jab the ball into the corner for his first league goal of the season (pictured).

Jake Cass nearly doubled the lead two minutes later with an audacious effort from the centre circle that passed a foot over a relieved Danny Bracken’s crossbar.

The second goal wasn’t long in arriving though. Cass set off optimistically after a long ball, arriving just in time to see home keeper Bracken and defender Ollie Cook make a complete mess of the clearance, leaving the Town striker, who loves chasing seemingly lost causes, a free run at an empty net.

The first half then played out amidst a flurry of yellow cards and few efforts on goal.

Not surprisingly Carshalton began the second half positively, and reduced the deficit 10 minutes in. Town uncharacteristically lost possession on their left, and the resultant low cross was turned in by home skipper Tom Beere.

At this point though, the home side’s propensity for unsolicited gifts kicked in once again. Under no apparent pressure, defender Bradley Williams nodded a long ball past Bracken, to the travelling fans’ disbelief – and delight.

Town saw out the remainder of the game without difficulty, although injuries to goalscorers Youngs and Cass are a concern; at least we have a ten-day cushion before our next fixture. Town now appear to be gathering momentum in time for a tricky set of fixtures in November and December.