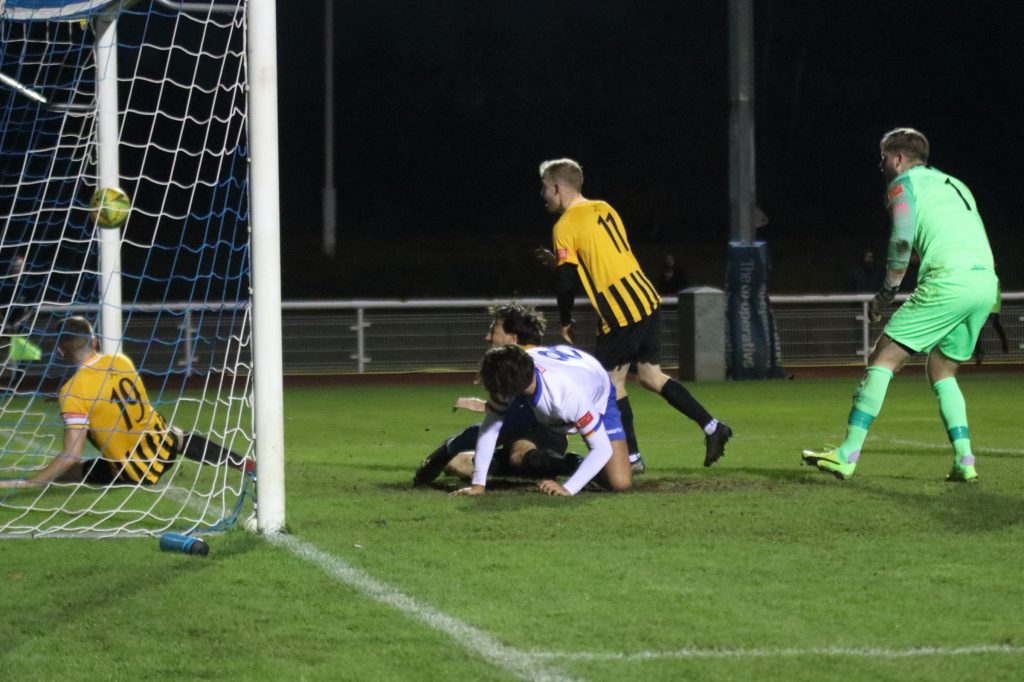 It had to happen sometime. It’s just a shame our unbeaten home league record ended against one of our playoff rivals on Saturday.

In all fairness, Folkestone were the sharper side over the 90 minutes with too many Towners players uncharacteristically off the pace.

It was not one of our best days at the office, with too many freekicks and corners wasted and too much hesitant defending, but as Andy Leese said in his programme notes, we can’t play well every week.

This team has a habit of bouncing back from adversity and we are still in second place after some other results went in our favour although not, of course, Worthing’s.

Jerry Gyebi, hindered by an early booking for a reckless challenge just outside the area, went on to have a particularly difficult afternoon against Folkestone’s clever forwards – just as he did in the corresponding fixture earlier this season when he was substituted.

But like the rest of the team Jerry will doubtless learn from the experience and come back stronger.

It all started so well with three attempts by Lyle Della Verde, the third of which stung the hands of Timothy Roberts.

But we fell behind on 15 minutes when a corner was flicked on by Adam Yusuff and Michael Everitt, making his first start of the season, got the last touch.

We have had a habit of hitting back hard when behind and were level within two minutes courtesy of Mo Faal who showed great anticipation to finish off a lightning three-man  move involving Della-Verde and Percy Kiangebeni.

But the Seasiders’ superior movement and link-up play, especially down the left between Kieron McCann and the superb Alfie Paxman, soon had us in trouble again and on 30 minutes they regained the lead as David Smith put Yousuff through to score.

A yard faster than us, Folkestone threatened to take a stranglehold and might easily have had a third before the interval as Paxman cut in and struck the roof of the stand

We needed to get far tighter on Folkestone’s front two and on 63 minutes the management team made a timely double substitution as we switched to a back three.

But just as if we looked like getting back on level terms,  we were caught cold by a Folkestone third. A curling McCann cross took out the entire defence and Smith was on hand to convert into an empty net.

We still weren’t done, however. Sam Youngs bundled the ball in for 2-3 in a goalmouth scramble to give us hope. Then two last-ditch interceptions by the Folkestone  defence blocked further goalbound efforts while Mo couldn’t quite keep his shot down in the dying moments.

Whilst the officials made several bizarre decisions – not least unused sub Scott Thomas being booked for gesticulating in stoppage time — Andy admitted some of the players did not perform to their usual standard as we conceded three for the first time since September.

“It was difficult to take today but the damage was done in the first half when we did not work hard enough and we couldn’t repair it,” said Andy. Then the third goal killed us. But we’re still in a good position.”

We certainly are with Bowers and Pitsea, very much an improving team, next up on Tuesday night.