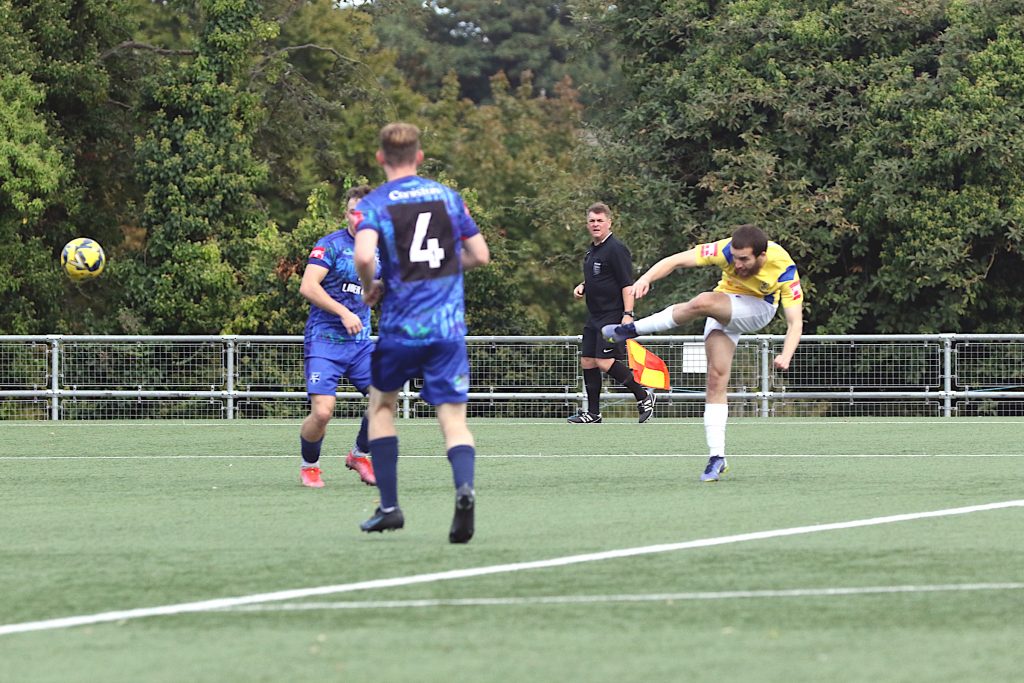 Everyone who witnessed Bilal Sayoud’s stunning strike at Margate a couple of weeks ago marvelled at the sheer technique. But no-one was the least bit surprised, writes Andrew Warshaw.

Bilal may not start every game but his ability on the ball has never been in doubt.

“I do have that in my locker, sometimes it’s just about the confidence in taking it on,” says Bilal who is relishing his second spell at the Town.

“When we lost Mo, some people wondered where the goals would come from. But Lyle had double figures last season as did I, albeit not at Enfield. We also have Jake and Marcus, who is champing at the bit. Plus Sam of course.”

Ever since returning to the Town, Bilal has enjoyed every moment, whether starting or coming off the bench. The phrase impact player is a compliment he recognises though obviously he would prefer more.

“It’s not really a tag I would like to stick because obviously like any player I’d ideally like to be starting games. But the competition now is fierce.”

All teams have their wobbles but Bilal is confident Town can mount a consistent challenge.

“We’ve got so many options around the squad now. Two or three wins in this league puts you right up there.”

As for his own footballing experience, Bilal could be forgiven for wondering what might have been after being on Coventry City’s books for over two years when the club were in League One.

But it’s not something he bangs on about and is getting just as much pleasure out of playing non-league football. “I don’t really bandish the Coventry thing about because I don’t dwell on the past. But if I’m 100 percent honest, I didn’t feel secure in myself there.

“It taught me a lot about professional football and how cut-throat it can be. But on the plus side, also about high standards and how to treat your body. You watch football on tv and think ‘I can do that’. But some people don’t realise the daily grind.”

It wasn’t difficult, after spells at Met Police, Wingate and Hendon, for Bilal, who works for a charity, to make the decision to return to Enfield.

“It gives me far more satisfaction than when I played professionally. I’ve always loved the club. When I left the first time I wanted to get more experience. But most of the teams I played for were never really challenging come the end of the season. I came to realise you want to be up there.”

Religious faith,  as many of you will know, is a huge part of Bilal’s life as a staunch Muslim. Before the season started he went on a pilgrimage in Saudi Arabia for three weeks.

“It wasn’t easy trying to keep fit. I knew some players were leaving and I wanted to stake a claim. But it took longer for me.”

Managing to combine playing football with his religious faith has become second nature to Bilal who prays five times a day.

“We all have our different faiths and beliefs. The club has been nothing but supportive and accommodating, always offering me a room to pray in, whether before games, halftime or in the middle of training. It’s that kind of club.”