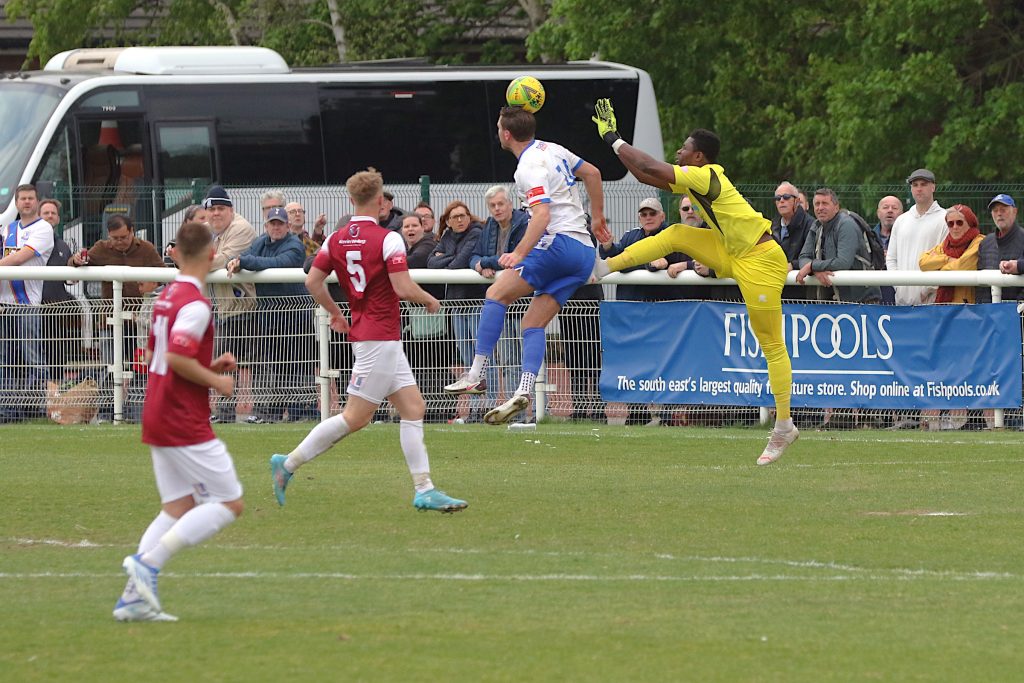 What a day. What a Season. And it Ain’t over yet!

To chants to “We’re Proud of You”, Enfield Town rounded off their best ever Isthmian League season with a record points haul to finish third in the table, thereby clinching a home semi-final playoff against Hornchurch.

On a dramatic final day of Step 3 action, we needed to better Hornchurch’s result against Wingate and Finchley to leapfrog the Urchins and secure home advantage on Wednesday.

And we did exactly that courtesy of Adam Cunnington’s early second half goal, coupled with Wingate’s shock victory on the road. Thanks to W and F boss and former Town skipper Marc Weatherstone for helping us out!

The scenes of unbridled joy at the final whistle told their own story as the majority of a bumper crowd of 668 celebrated our first playoff for five years.

Jake Cass, who had a slight niggle, was left on the bench with our playoff place already assured as were Lee Chappell and Lyle Della-Verde, the latter two coming on late in the second half.

In a swirling wind and on a bumpy pitch, conditions were not easy but Town were deserved winners in a carnival atmosphere, upping our game in the second half against opponents whose approach play was neat but who struggled in the final third.

Mo Faal, the league’s second highest scorer with 32 goals, had the first big chance, his shot brilliantly pushed over by Amadou Tangara after just two minutes.  Mo then somehow contrived to shoot wide of the far post with only the keeper to beat.

At the other end  Nathan McDonald was forced into action with a magnificent stop from Charlie Bell while Alfie Bridgeman’s cross came off the shin off Nathan Odokonyero.

With the wind behind them, a youthful Bognor side enjoyed plenty of first-half possession but just before halftime almost paid for a mistake by Tangara who hit a poor clearance straight at Ryan Kirwan, the richochet falling just out of reach of the lurking Mo.

Straight from the restart, Bognor’s Charlie Bell let fly from 30 yards, McDonald palming the shot over, but that was the cue for Town to dominate the rest of the game with Bognor heavily reliant on central defender Joe Cook, their outstanding player on the day, to try and keep us out.

The game was won on 51 minutes as Cunnington beat Tangara to a diagonal ball from Sam Youngs and bravely headed home (pictured).

Jerry Gyebi should have quickly doubled the lead, missing the target with a free header from a corner, while Tangara saved from Youngs and Mo, who might have had a hat-trick on another day, struck another effort wide.

As news came in of Wingate’s lead at Hornchurch, it became imperative to hold on to what we had, encapsulated by Gyebi’s fantastic clearance with Odokonyero ready to pounce.

But in truth but we rarely looked in any further trouble, Percy Kiangebeni looking particularly strong just at the right time with a series of timely interceptions. Indeed, we might have stretched our lead late on when calls for a penalty went unheeded after Tangara appeared to take out Kirwan.

Now it all comes down to Wednesday night’s showdown with Hornchurch, last season’s FA Trophy winners who, in the blink of an eye, find themselves having to travel to us instead of vice-versa.

It is, quite simply, the biggest game in our history with a place in the playoff final at stake against Bishop’s Stortford or Cheshunt.

“A great day all round that worked out well for us,” said Andy Leese. “Conditions made it hard in the first half but we used them in the second and dominated. Cunns led the line well. It rounded off a great season but there is still a job to do, starting on Wednesday. A mention to the fantastic support again.”