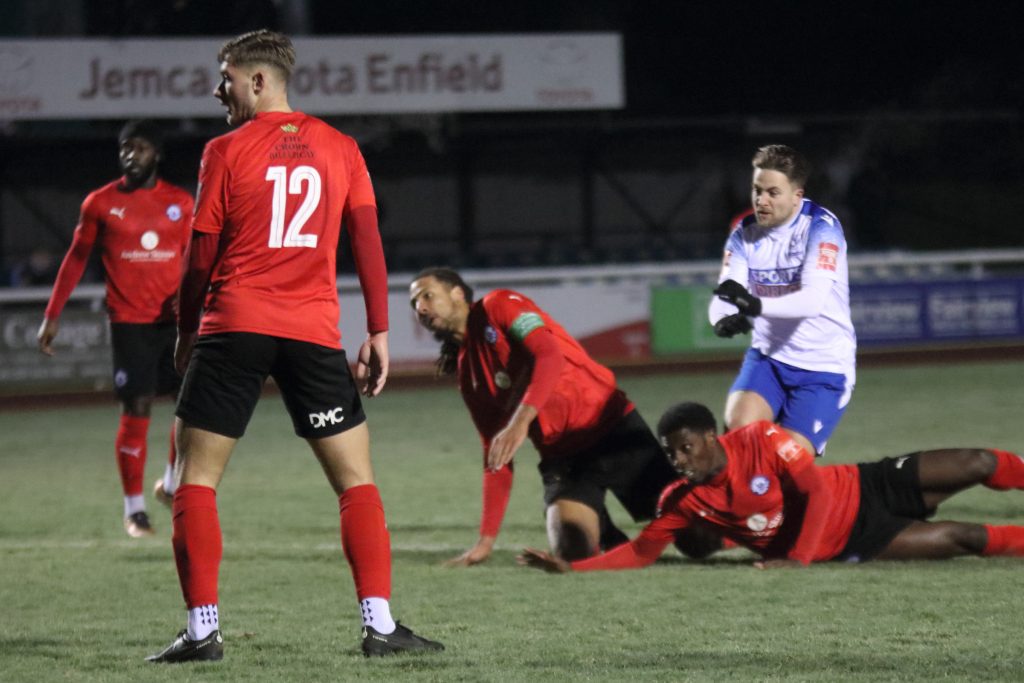 Backed by raucous support from first whistle to last, Enfield Town produced one of their best performances of the season – if not THE best – on a freezing but highly satisfying night that pushed us up to third on goal difference.

Against a side who were in Step 2 last season and were unbeaten in their last six games, Town produced a quality display – capped by two glorious goals — to delight a more than decent midweek attendance of 415, especially given the conditions. Hats off to the ground staff for getting the game on.

As an advert for Step 3 football, it was right up there, with much of the game played on the deck on a surface that was not easy to cope with.

It was hard to pick out any one player, with everyone putting in a shift and, crucially, covering for each other when necessary.

Town were defensively strong with bodies on the line when needed,  aggressive in midfield and lively up front – all important factors against dangerous opponents who posed a genuine threat in the first half but didn’t lay a glove on us in the second.

With our last two games having been postponed, Town were eager to get straight on the front foot.  Andre Coker twice went close while at the other end we managed to clear a Ricay effort off the line, followed by Nathan McDonald making a superb double save.

In an end to end opening period, Marcus Wyllie twice blasted over and both Coker and Adam Cunnington had further chances while for Ricay, at times slick on the ball,  dangerman Bradley Stevenson and Alfie Cerulli were narrowly off-target.

The deadlock was broken on 36 minutes courtesy of a sublime Joe Payne freekick. Billericay were furious at Marvel Ekpiteta being penalised for holding down Cunnington and Payne made them pay with the sweetest of strikes.

In the final move of a highly entertaining opening half, Stevenson weaved his way into the box, only for Nathan to preserve our lead.

Billericay have invariably been a second half team but not this time as we took complete control.

Wyllie so nearly doubled our lead from Chez Isaac’s glorious pass, only for Harry Seaden to pull off a fine stop, and the Ricay keeper was quickly on hand again to push away Joe Payne’s effort.

All it needed to round of a terrific display was a second goal – and what it goal it was.

Shortly after coming on as a sub for the evergreen Scott Thomas, Lewis Taaffe jinked his way into the box on 82 minutes, left two defenders floundering (pictured) and picked his spot with a fabulous finish.

There was still time for the luckless Wyllie to misplace a header from six yards out but Andy Leese was understandably delighted with the display.

“We got the goals at the good times and the second half performance was outstanding,” said Andy who is building formidable teamwork and camaraderie as we enter the second half of the season – as well as competition for places.

“Billericay are a very good possession team so the players deserve all the credit.  It’s not easy leaving out good players. The hardest part of the job is keeping everyone happy.”

“Mo’s goals last season were huge but perhaps disguised some of our weaknesses elsewhere on the pitch which we no longer have. I’m not sure we’d have got that result in the second half of last season.”