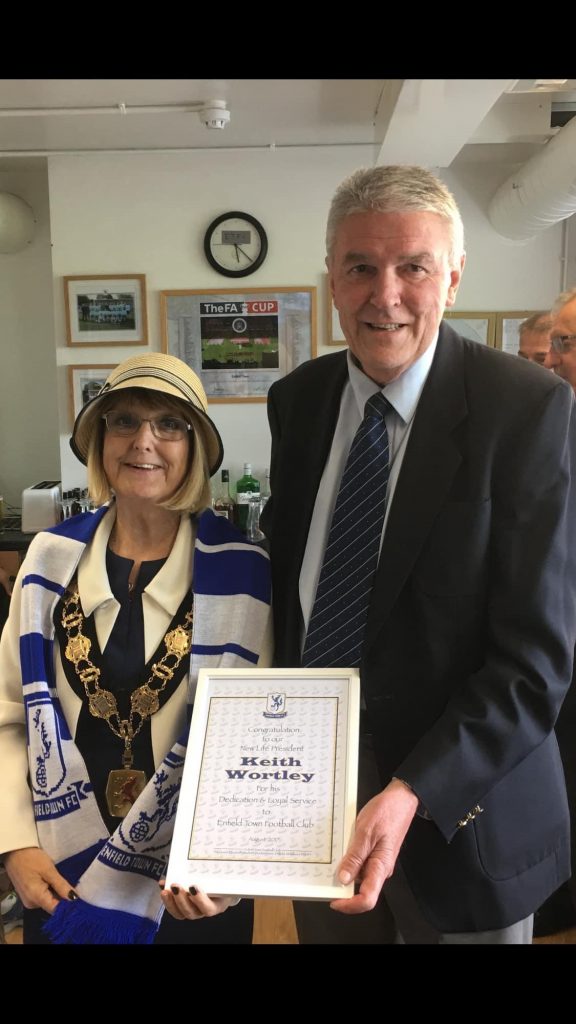 The club are incredibly saddened to learn the news of the death of club life vice-president Keith Wortley.

Keith had a huge influence on football in Enfield, firstly as secretary and director at Enfield FC during their heyday before helping to set up Enfield Town FC in 2001, again taking the role of secretary.

He played a huge role in the successful delivery of the project to move to the QES in 2011, utilising both his professional and football experience to ensure the move was a huge success. Following his stepping down from the secretary role, we were honoured when Keith accepted a life presidency in recognition of his tremendous work for the club.

Keith (pictured here receiving his award from ETFC director Christine Hamilton when she was mayor of the borough) was the epitome of a true gentleman who had so many friends throughout the football world.

Chairman Paul Reed said: “It’s impossible to overstate how important he was to football in the Borough. I’ve known Keith for pretty much all of my life and am very proud to have been able to call him a friend.

“What he didn’t know about running a football club wasn’t worth knowing and he offered me great advice and insights during my first few years as chairman. His legacy at the club is certainly the QES and we are forever grateful for his incredible work in making our dream of a ground of our own a reality. Keith was the most honest, fair, professional and diligent man you could ever meet, always doing things the ‘right way’ whilst still maintaining a wonderful sense of humour. Myself and all of his friends will miss him greatly.”

Keith is survived by his wife, son, daughter and grandchildren. He will be sorely missed by everyone at ETFC. The club will pay a special tribute at our home game against Kingstonian on 7th January.