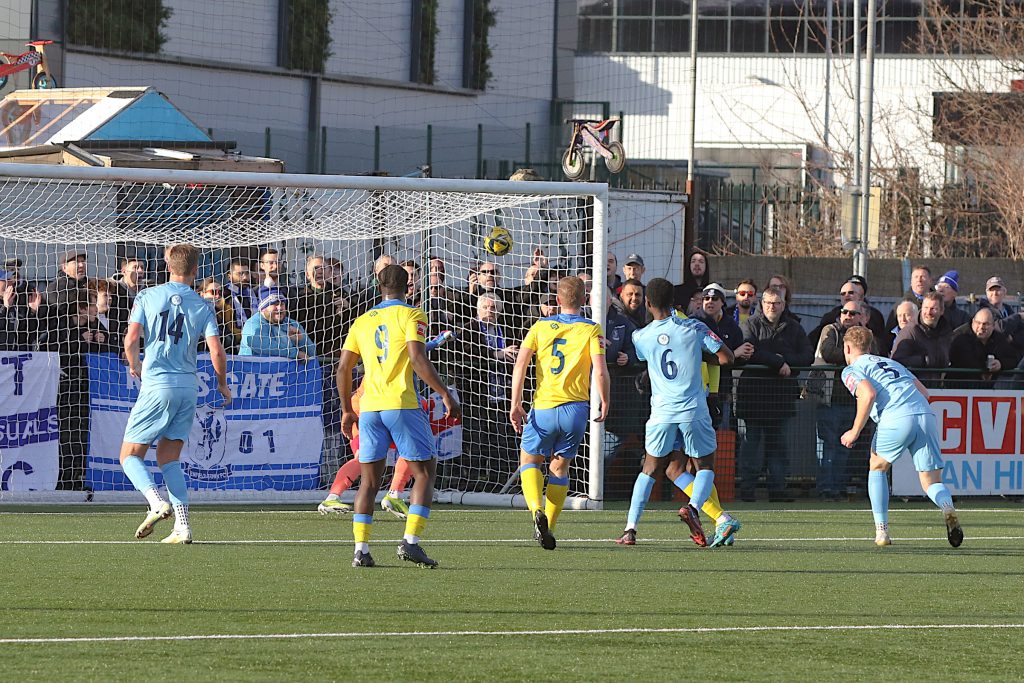 On a ground where we invariably get scant reward and with several key players still missing, Town made it back-to-back derby wins on Monday to round off a thoroughly satisfying Christmas and New Year period.

In front of over 800 fans, a significant number of whom were Towners fans making the short journey, we moved up to fourth in the table as other results went in our favour.

Following the Boxing Day rout of Potters Bar, this was always going to be a different encounter altogether against a team who invariably raise their game against us.

After controlling the first half, we at times had to dig in but Nathan McDonald was largely untroubled by Haringey’s pacey forwards.

Skipper Scott Thomas, with another outstanding midfield display, led by example while all those around him put in a committed shift. The management team now have the proverbial nice selection head-ache when those unavailable are back!

After a minute’s applause to celebrate the life of Pele, we got straight down to business and deservedly took the lead on 19 minutes.

Sam Youngs, with an audacious piece of improvisation, forced a tip-over save from Luke Mewitt and from the resulting short corner, Josh Hill – arguably man of the match – powered home a header from James Dayton’s cross (pictured, right).

Town continued to dominate and although clearcut chances were in short supply we were well worth our halftime lead.

Haringey have a habit of never lying down and almost restored parity within two minutes of the restart when the teenage Stefanos Georgiou cut in from the left and skimmed the bar.

Two Borough freekicks in dangerous positions then ensued, both of which thankfully came to nothing, while Town suffered a blow when Dayton had to be subbed with what looked like a hamstring or groin problem.

His replacement, Lyle Della-Verde, almost doubled our lead when he dribbled past his marker and saw his left-foot shot flash just wide.

Town needed that second goal to halt Haringey’s quest for an equaliser and got it on 85 minutes courtesy of some neat interplay. Della-Verde played in Youngs and his low cross was knocked home by the tireless Adam Cunnington.

That should have been that, only for a nervy, blood and guts finale as Borough halved the deficit.

On 90 minutes, Jueven Spencer, who otherwise put in a faultless display, was adjudged to have up-ended Kaylen Hinds who sent McDonald the wrong way from the penalty spot.

In the ensuing melee as Haringey’s players sought to grab the ball with time running out,  Nathan was booked and Haringey’s ex-Towner Olu Durojaiye shown a straight red card for a headbutt for which he can have no excuses.

Down to 10 men, Haringey arguably had their best period but we managed to see the game out and might have added a third with the very last action.

With every one of Haringey’s players committed forward, the ball was deflected into Della-Verde’s path but after running half the length of the pitch unchallenged, his shot was pushed to safety by Mewitt, followed by the final whistle.

“I felt we controlled the game today,” said Andy Leese who must have been delighted with the commitment from everyone in all-blue and another eye-catching display from new signing Chez Isaac. “We scored from a well-worked corner and withstood some Haringey pressure in the opening period of the second half.”

“The last 10 minutes were more fraught than they needed to be but we had the cushion of the second goal by then. A great three points in the context of the other results around us. A successful Christmas period where we have adapted and coped with the loss of some key players.”