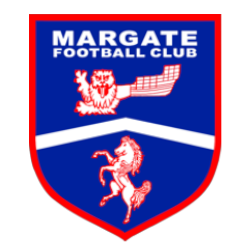 Tomorrow we make the trip to Margate hoping to avenge our last-minute defeat in the corresponding fixture last season.

Margate are currently 14th in the early-season table with eight points from six games.

Last Saturday they bowed out of the FA Cup losing 1-2 late on at Dulwich Hamlet in front of a crowd of 1,725.

In the League their most recent result was a 4-0 home win against Herne Bay.

You can purchase tickets here

There is a possibility next weekend’s fixture may be moved to Enfield because of a problem with the Casuals stadium where a tree has fallen on the clubhouse.

The favoured option by both clubs is that the game is moved to the QEII Stadium next Friday 30 September , but we are currently waiting for the League to sanction this change. Obviously we will let you know as soon as we can.