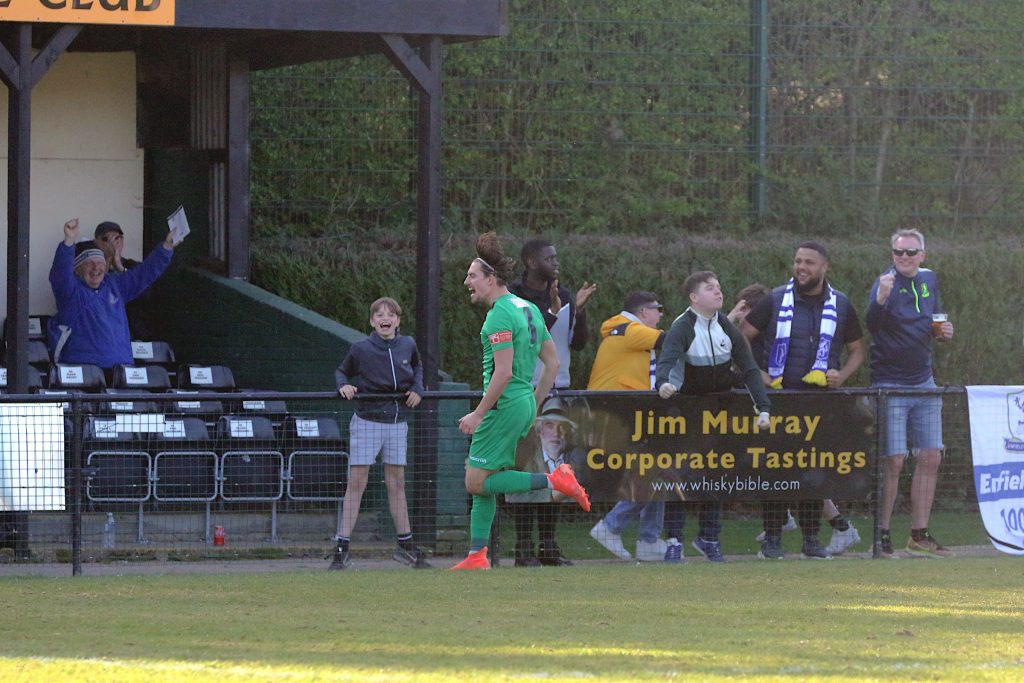 A fifth consecutive win, this time at struggling Merstham, that was far more convincing than the scoreline suggests and might easily have improved our goal difference had we converted more chances.

On a hard, bumpy pitch that demanded a direct approach, an unchanged Town started the game at a gallop, with Adam Cunnington and Mo Faal having shots saved by home keeper Patrick Ohman in the first 10 minutes.

Lewis Taaffe and Rian Bray were also narrowly off target as the Towners threatened to overrun their hosts.

The first goal finally arrived after 25 minutes, when Faal dispossessed a home defender 10 yards from goal and passed to Sam Youngs, who shot low into the net, much to the relief of the travelling faithful.

Taaffe then had two further chances to extend the lead, shooting wide when well-placed on 29 minutes and having a shot well saved by Ohman 10 minutes later.

Annoyingly, Town then conceded an equaliser a minute before the break, Tahjae Anderson heading in a right wing corner at the far post. This was a touch unfair on the Town, who really should have been out of sight by then.

But we began the second half in the same vein. Manny Maja had a goal disallowed for offside just after the restart before Town regained the lead on 49 minutes. Again Faal provided the assist, rolling a square ball into the path of the outstanding Youngs (pictured), who banged it gleefully into the roof of the net.

Still Town pressed forward. The luckless Taaffe managed to hit the crossbar from three yards; Faal fluffed a far-post header; and Taaffe’s right-wing corner somehow made its way unmolested through a crowded goalmouth.

The insurance goal finally came on 77 minutes courtesy of Mo, shooting low from the left into the far corner of the net.

Only hours earlier Town’s top scorer had made a guest appearance on Sky’s Soccer AM show, great publicity for both himself and the club on what was billed as Non-League Day.

Although the home side never gave up, Town played out the remaining few minutes without undue difficulty, successfully retaining third place in the league.

“Another solid professional performance to keep us on track,” said Andy Leese. “We dominated the game until we scored, then allowed Merstham some space and they took advantage.”

“We altered our shape at halftime and it worked, with Mo alongside Adam and a narrow midfield to get us on the ball more.”

“The only disappointing aspect is that we didn’t take more of the numerous chances we created. I think we will need to win most of our games to get to where we want to be.”