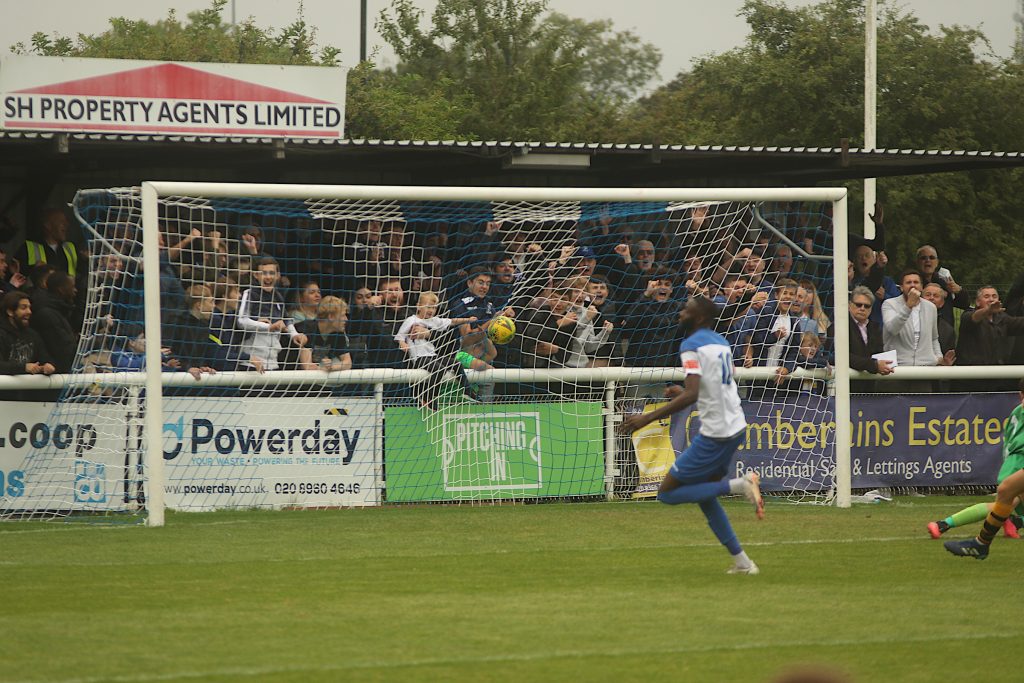 In front of 686 spectators, our biggest league gate for several years, Bank Holiday Monday brought another battling victory for the Towners as we narrowly overcame neighbours Cheshunt to make it 10 points out of 12.

Like us, our visitors were protecting an unbeaten start to the season but they were undone by the game’s one moment of quality as Mo Faal produced a spectacular finish on 38 minutes to round off the best move of the game featuring Sam Youngs, Scott Thomas and Adam Cunnington.

Special praise should go to Adam who perhaps had a point to prove against his old club. Despite precious little game time and being booked late on for dissent, he worked tirelessly for the team especially when using all his experience to hold the ball up in the last 15 minutes as his teammates tired after two games in 48 hours.

Adam wasn’t the only player trying to impress against his former club. Ken Charles, who enjoyed a lengthy spell with us, was lively up front for Cheshunt throughout and on another day might have found the net.

Both sides had early chances – Mo for us and Joe Re for the Ambers – before the visitors were inches away from taking the lead on 20 minutes. Reece Beckles-Richards’ curling screamer came back off the woodwork and somehow bounced out.

A double save from Nathan McDonald moments later kept us in the game before the most worrying aspect of the first half —  an injury to Josh Urquhart.

Having hurt his ankle whilst producing a superb tackle on Charles earlier in the game,  Josh had to be stretchered off just before the interval after damaging his knee and we had to re-organise.

By then, fortunately, we had taken the lead through Mo’s brilliant first-time volley in a wonderful four-man move.

Apart from a spell early in the second half when Charles, showing quick feet, twice almost levelled, Nathan was largely untroubled in our goal.

By contrast, substitute Andre Coker, on for the injured Lewis Taafe at halftime, had two excellent chances to put us further ahead while only a saving tackle Adam Crowther prevented Mo notching his second of the game.

Before the finish, our walking wounded list got worse as  Scott Thomas limped off following a tussle with Zubayr Brodie. We can only hope he recovers ahead of the all-important FA Cup first qualifying round game against Dereham on Saturday.

At least the influential Percy Kiangebeni should return, having been away on other business and conspicuous by his absence in our midfield.

In all, another spirited display of teamwork and togetherness. Hats off to the management team as well as the players.