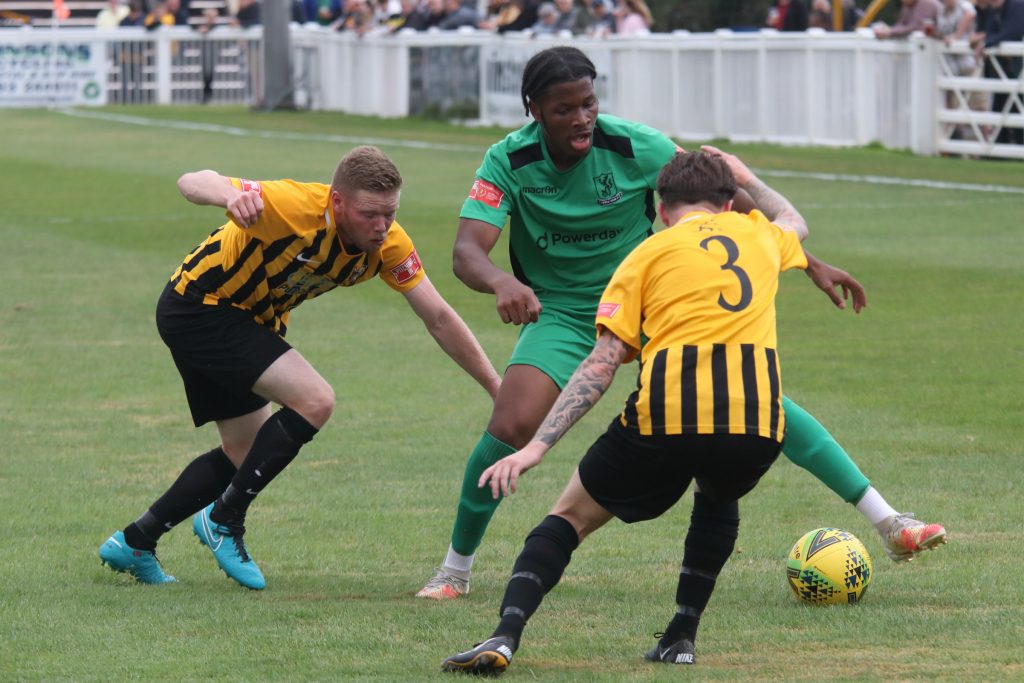 Andy Leese hailed an excellent point as we maintained our unbeaten start to the season with a hard-fought draw in front of a bumper 800-plus crowd on the Kent coast.

Sam Youngs and Adam Cunnington, the latter back after injury, came into the starting line-up after both sides won their opening two games.

Folkestone, who were virtually at full strength, beat much-fancied Worthing 3-1 in their opening fixture which puts into perspective just how satisfying this result was.

The home side had by far the better of the first half and were convinced they should have taken the lead after just six minutes when David Smith’s shot hit the underside of the bar, only for the referee to rule it had not crossed the line. It was a fortunate let-off and VAR may well have ruled in Invicta’s favour.

The first half was very much a backs-to-the-wall job for us as Smith, Alfie Paxman with a free header, the dangerous Ade Yusuff and Jordan Wright had further chances to put the game to bed.

On 23 minutes Nathan Smith did wonders to block one shot and then kick the ball off the line after a period of sustained pressure.

The Towners were defending resolutely and clearing their lines, but the ball kept coming back again as they lost possession.

Following a torrid opening 30 minutes we came into the game and Cunnington hit the post after great work by Youngs. This galvanised us and Percy Kiangebeni found space after a trademark strong run and his shot was turned wide for a corner by Tim Roberts.

The second half saw a change in personnel and formation by the management team as Jerry Gyebi was replaced by Ryan Kirwan and Town went to three  at the back with  Percy and Ryan  providing more width.

The effect of this was to nullify Folkestone as an attacking unit with the Towners looking the more likely side.

After a busy first half, Nathan McDonald had far less work to do and on 74 minutes Mo tried to find a small gap  between the post and opposing keeper’s legs and saw the ball almost squirm in.

Mani Maja was cautioned after giving away a free kick on 86 minutes in a dangerous area but luckily for Town, Callum Davies’ header was gratefully received by Nathan.

There was still time for Mo to see his stoppage-time effort saved and for Percy’s follow-up to be blocked in a goalmouth scramble.

“I am delighted with a point,” said Andy. “We made changes at halftime to match what Folkestone were doing and prevented them from creating too many second-half chances.”