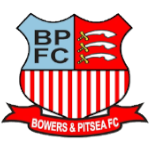 After suffering an unexpected setback against Kingstonian, Enfield Town aim to bounce straight back this Saturday at lowly Bowers and Pitsea.

Just a reminder this is a 2pm kickoff so those making the trip need to plan accordingly.

Bowers may be third from bottom of the table but they are fighting for their lives and have actually only been beaten three times in the league on home soil.

On their day they can be dogged opposition although in their most recent outing they lost 1-2 at home in midweek to neighbours Canvey Island in the Essex Senior Cup.

One familiar face in the Bowers line-up could be former Towners favourite Billy Crook who joined the club in November from Cray Wanderers.

Town defenders James Richmond and Lewis Knight have both completed their three-game bans while Jake Cass could also be back after a period of unavailability.

The game marks the first of three successive away trips for Town with tough fixtures to come against Folkestone and Hastings.

Three points in Essex on Saturday would be a fantastic springboard from which to go into those games as we aim to maintain our place among the leading positions.

Directions to Bowers can be found here: