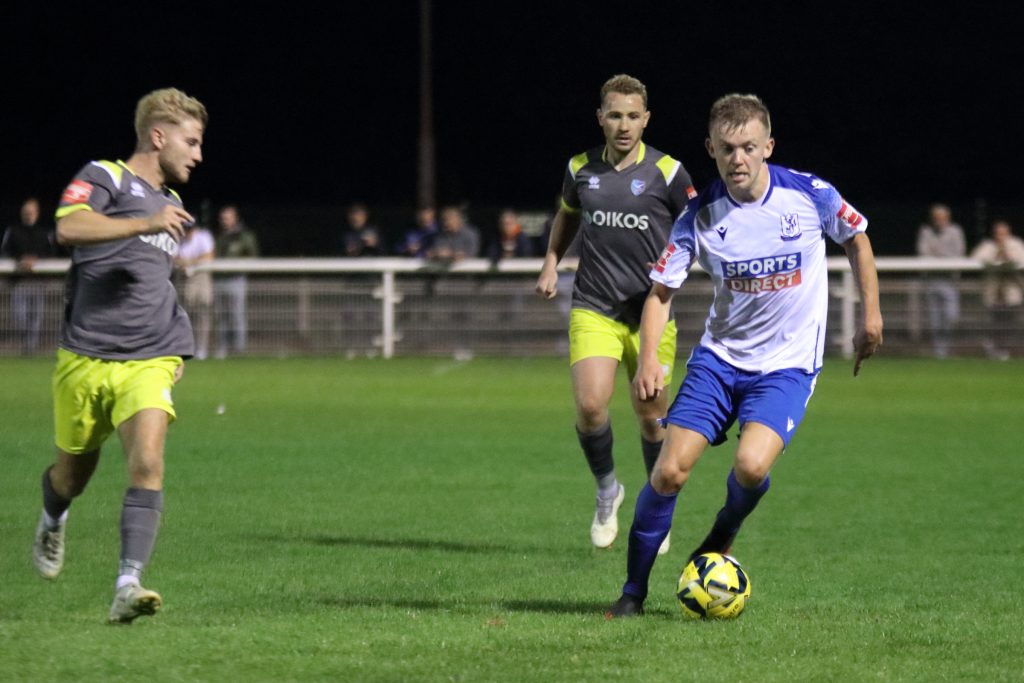 After scoring nine goals in our previous two games, albert one of them a friendly, we were surprisingly toothless in the final third and would probably have lost but for several timely saves from Nathan McDonald — aided and abetted by some resolute defending across the back four.

The game was preceded by a minute’s applause in honour of the late Mike North, a life-long Town supporter who sadly died recently.

When the action got going, it was as if Canvey had been given a proverbial kick up the backside following their 3-0  home loss in the FA Cup on Saturday – one round after ironically inflicting a heavy defeat on us.

Just as in that fateful cup tie, Evans Kouassi was again their danger man, troubling us with his lightning pace and trickery before we got to grips with him and managed to stop his runs.

Twice in the first 20 minutes, Koussi broke clear to force excellent saves from Nathan, then whipped in a cross that was headed wide.

A Canver penalty claim when Luca Albion went down left the referee uninterested but the visitors remained a threat going forward, Bradley Sach’s opportunist effort bringing a another finger-tip save from McDonald.

Our two best half chances of the first half fell to Marcus Wyllie whose touch let him down – as it did, to be fair, with the rest of our attacking players.

Adam Cunnington managed to finally get a Town effort on target but frustratingly our passing wasn’t up to scratch as we invariably chose the wrong options whenever we had the ball.

But when you don’t take your chances, you can pay for it and the visitors almost did. In what looked like a Town training ground routine, Sam Youngs sped down the left to collect Coker’s freekick and his centre flashed across goal before being cleared off the line. Substitute Bilal Sayoud then forced a decent save from Bobby Mason.

But even a switch to 4-2-4 couldn’t produce any serious creativity for us, compounded by the absence of Lyle Della-Verde serving the first of a three-game ban.

“Hand on heart we didn’t do enough to win the game,” said Andy.  “After Brightlingea and Saturday’s friendly when we were full of attacking intent, we weren’t going past people or putting balls in the box. Our decision making in the last third was poor.”

“I’m frustrated and disappointed. We’ve got to be winning those sort of games at home if we want to be doing anything this season. The one real positive was another clean sheet.”

Next up a visit to Margate on Saturday and a chance to avenge  last season’s agonising last-minute defeat on the Kent coast.