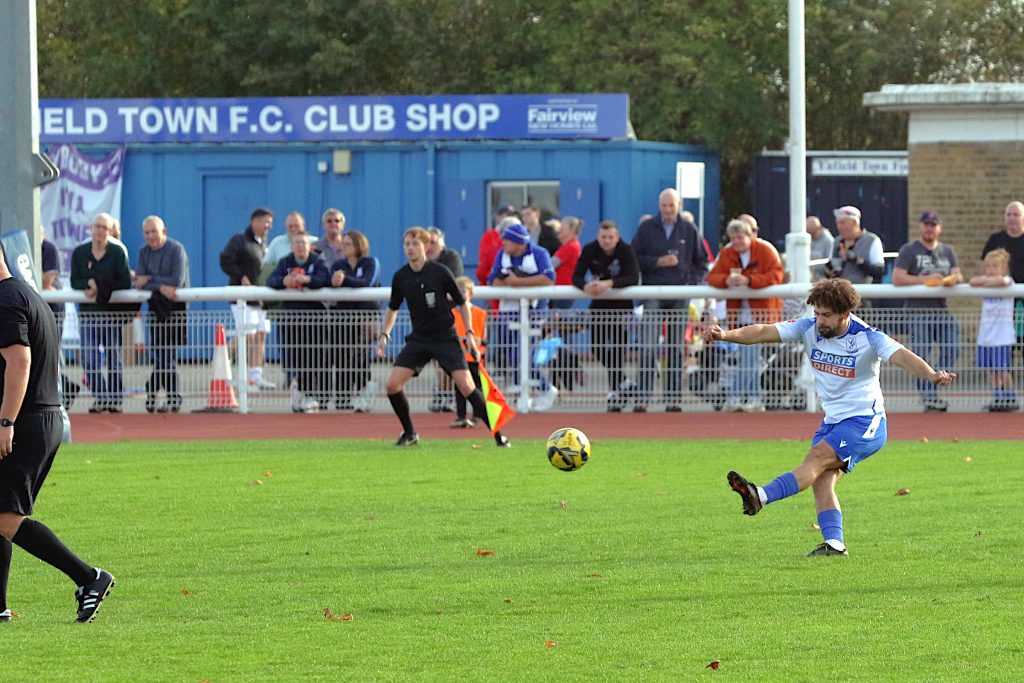 In front of a bumper crowd of 678 celebrating our annual Whole Club Day, Enfield Town and Herne Bay served up a highly entertaining end-to-end game that could easily have ended with twice the number of goals scored.

From the Town’s point of view, the game saw a welcome return to winning ways –their first victory in five.

The action exploded into life with two goals in the first quarter-hour. Just five minutes had passed when Town were awarded a freekick in that area of the pitch that should really be known as ‘Lyle’s Office’ – 25 yards from goal and just right of centre.

Mr Della Verde curled the kick deliciously into keeper Josh Strizovic’s top left hand corner – we were up and running.

The visitors attacked boldly in search of an equaliser, with Tashaun Walters firing a shot wide and Keiron Campbell stinging Nathan McDonald’s palms after cutting in from the left. They found their equaliser after 15 minutes, the outstanding Marcel Barrington latching onto a poor defensive header and belting the ball past McDonald.

The game continued at a lively pace. Sam Youngs missed badly from 12 yards and Barrington had a shot well saved at the other end before Town went back in front on the half hour, Della-Verde’s right-wing cross being turned into his own net by right-back Che Krabbendam.

A frantic half concluded with Campbell forcing another decent save from Mc Donald.

The second half continued in much the same vein, and Town extended their lead on 56 minutes. Once again it was a Della-Verde special, this time low to Strizovic’s right – wonderful to watch.

Three minutes later Barrington forced an error from James Richmond to reduce the arrears, and the Town faithful were once again feeling a little concerned.

But after seven more minutes, we were all breathing a little easier. Della-Verde had a shot deflected wide, and from the resulting corner, Richmond headed down at the far post for Knight to turn the ball over the line.

The pace of the game slowed a little after that, as Town were able to see out matters for a much-needed three points.