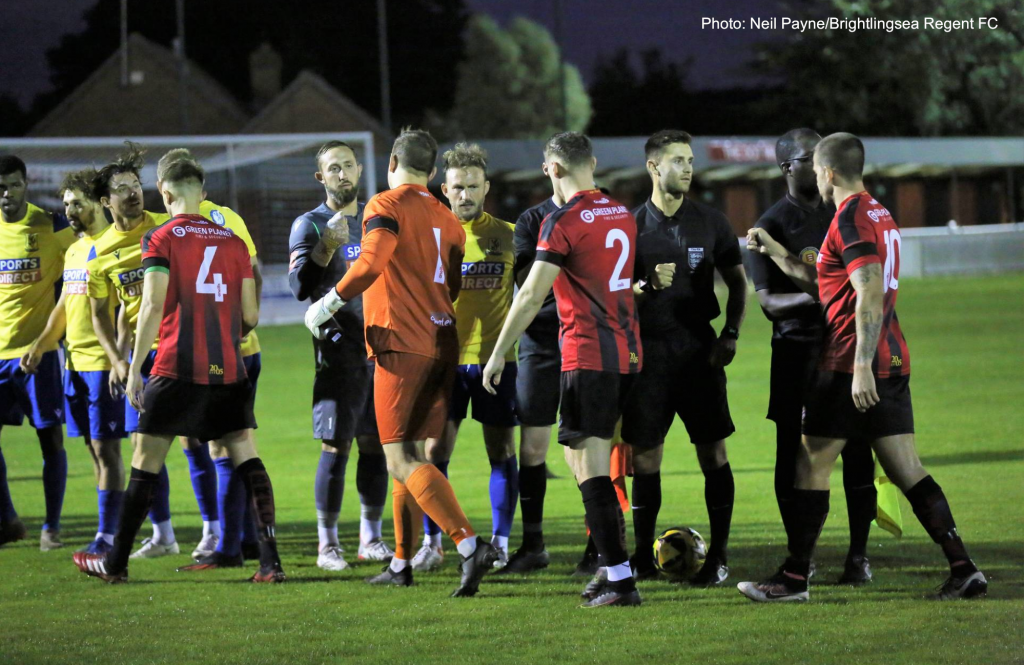 Now that’s better. A dominant Enfield Town performance resulted in four goals and an emphatic win over a Brightlingsea side who started the evening one point above Town in mid-table.

Andy Leese shuffled his pack following the heavy FA Cup loss at Canvey Island, reverting to a flat back four with Juevan Spencer given a first start at right back and Joe Payne making a second, indeed arguably a third, debut following his recent move back to the Town from Cheshunt. There were also starts for Andre Coker and James Dayton, giving the Town line-up a radically different look.

The Town were into their stride from the first whistle, with Coker fizzing a shot over, Lyle Della-Verde hitting the side netting and Sam Youngs heading against the top of the bar, all in the opening 20 minutes. The first goal arrived after 27 minutes, with Adam Cunnington’s shot being deflected past home keeper Charlie Turner. Payne then had a shot well saved, and Della-Verde curled a free kick just wide as Town concluded the half well on top.

The home side enjoyed a spell of possession early in the second half, and fired a warning shot across Town’s bows nine minutes into the half, Luke Woodward heading powerfully against Nathan McDonald’s cross bar from a right wing cross. Within a minute, however, Town doubled their lead; McDonald’s long kick caused confusion in the home defence, and Coker ran on to the loose ball to beat Turner with a powerful finish. Coker repeated the dose six minutes later with an equally emphatic effort from the other flank, and Town were out of sight.

Still Town pressed for more goals, with substitute Jake Cass hitting the foot of Turner’s post before Della-Verde added a fourth with a curling effort from Sam Youngs’ lay-off. Unfortunately, the game ended on a sour note for Della-Verde when he received a straight red card for a late tackle on the home side’s Zack Littlejohn. The decision seemed harsh, with referee Hursey seemingly making no allowances for the greasy surface, and having previously punished a similar-looking offence at the other end by Regent’s Dominic Locke with only a yellow card. Town comfortably played out the remaining ten minutes without alarm, however, and completed an excellent win that saw them jump to eighth place in the table.