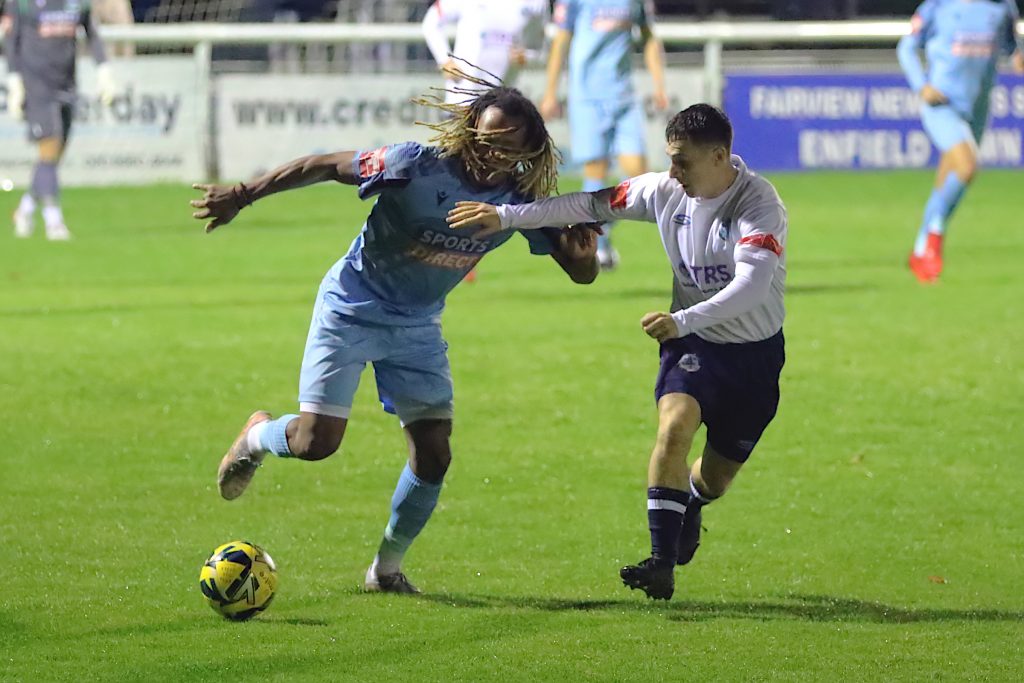 If ever the expression “job done” was appropriate, this was it.

Any club in any division would look a trifle leggy after having to play three games in six days so huge credit to the players for grinding out another three points that have pushed us to within striking distance of the top.

Players and management now deservedly have a week’s rest before the eagerly awaited FA trophy tie with Chesham, basking in the knowledge that they have responded superbly to the FA Cup debacle at Canvey Island with three straight wins and an increasingly healthy competition for places.

This fixture was originally due to take place on Saturday at Casuals but was reversed to Friday at QEII as a result of a tree falling on the Casuals clubhouse.  As a result, Enfield played in light blue because the only kit Casuals could muster was one with white shirts.

The goal was as spectacular as it was unexpected given what had gone before which wasn’t very much as both teams defended in depth and tried to hit the opposition on the break. A timely clearance by Ruben Carvalho prevented Adam Cunnington pouncing on a whipped-in Andre Coker cross while a trademark Joe Payne long throw was almost turned in.

As for the visitors, Elijah Simpson fired just wide while Rian Bray’s interception prevented Mohamed Diallo from getting in a shot.

Soon after the break, Casuals appeared to have a decent penalty shout waved away, only to concede a spotkick themsleves on the hour. Coker was bundled over by Benjamin Checklit and got up to confidently double our lead.

Andre almost made it three, spooning over the bar from six yards, while substitute Lyle della-Verde’s run and shot whistled past the post.

At the other end Dequane Wilson-Brathwaite brilliantly cleared of the line as Casuals tried to respond while Mohamed Diallo’s bullet header whistled narrowly wide.

The visitors will rue a string of crosses being dealt with efficiently by Town’s defence which was arguably the best part of our game on the night.

“Not the best of games but they’re the sort of fixtures you just have to dig out,” said Andy Leese. “Especially in our position – three games in six days effectively. We weren’t at our best tonight but we’ve done what mattered. And kept a clean sheet.”