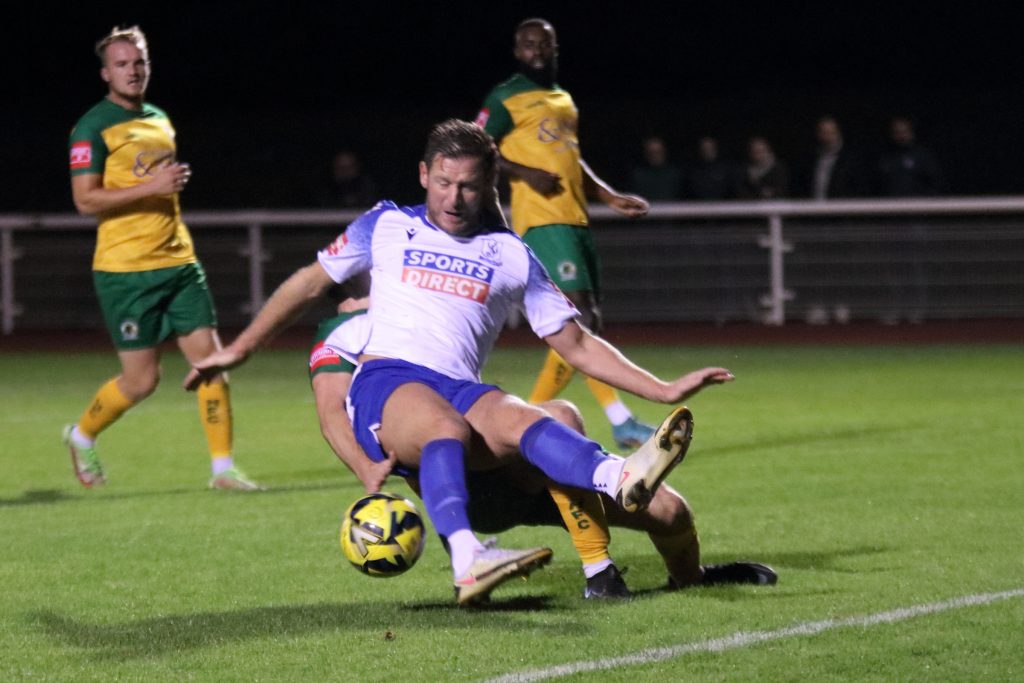 Enfield Town followed up Saturday’s confidence-boosting win at Margate with three more points to leapfog Horsham and move into fifth place in the table.

Tuesday’s fixture was the re-arranged game that was postponed because of the death of the queen and we took full advantage against another of the pre-season playoff hopefuls.

Horsham have stuttered somewhat after a fine start to the campaign but play the game the right way and had their moments against an unchanged Town.

But on clearcut chances, we were well worth the win and could go even higher if we can make it three in a row against Corinthian Casuals on Friday – a game that has been switched to QEII after a tree fell on the Casuals’ club house but for which we have precious little recovery time.

Enfield started the game with a bang and should have gone in front straight from the kickoff. Wraynel Hercules was played in down the right but panicked somewhat as he advanced on goal and put his shot on the running track.

But on 12 minutes we went in front when a cross into the box was only half-cleared  and Andre Coker shot low into the corner for yet another early-season goal.

The Hornets managed to fashion a number of promising positions without being able to supply the final touch and on 26 minutes our lead was doubled.  Coker’s shot was well saved and Adam Cunnington (pictured) — a tower of strength all evening, dribbling past fullbacks, turning goalkicks into corners —  forced home the rebound.

In the final action of the half, Lucas Rodriquez curled a 20-yard freekick over the wall but Nathan McDonald was on hand to make an excellent save.

The second half was just a couple of minutes old when Horsham, hit by a lengthy injury list, halved the deficit. Jack Mazzone whipped in a fierce low cross and Rian Bray, in trying to clear, only succeeded in knee-ing the ball into his own net.

Suddenly Horsham gained a new lease of life and started to winning second balls. Mazzone  narrowly cleared the bar from 25 yards and the defensive side of our game, so improved in recent matches, was frequently called into action.

But still we had the better chances – four in particular. When Sam Youngs took advantage of Michael Beeney’s punched clearance, his goalbound chip seemed certainly to make it 3-1, only for Tom Day to rush back and produce a miraculous  goal-line clearance.

There was more to come in the shape of substitute Bilal Sayoud who had three golden opportunities in quick succession to add to his sublime strike at Margate.

First, he struck a freekick fractionally over. Then, in the dying moments, he probably should have done better when pulling his shot narrowly wide, and got even closer by striking the post as Horsham pushed forward.

“In the first half we smothered them in midfield and they couldn’t get out,” said Andy Leese. “2-0 is an awkward scoreline and we started the second half exactly as we did at Margate.”

“At times we then had to dig in. There were some tired legs. We are running harder than we’ve ever done to get to where we want to be but it’s taking its toll on one or two.  I have to give a  special mention to Cunns for yet another outstanding shift. I’m absolutely delighted with the outcome. We don’t have much recovery time before Friday and may have to freshen things up but then we have a full week.”