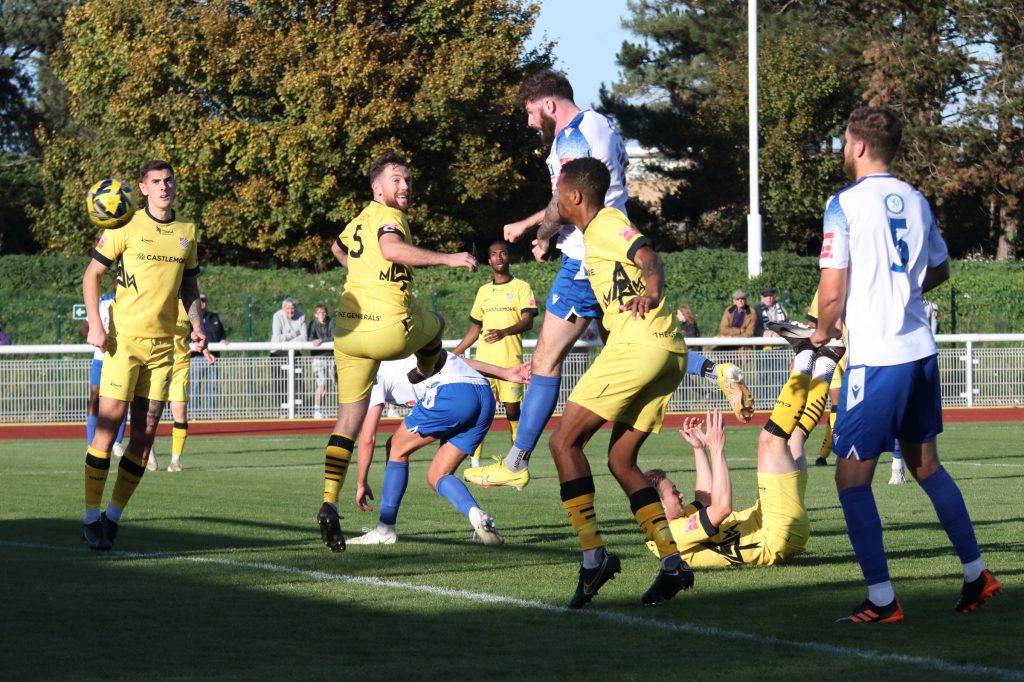 Enfield Town’s exploits in this season’s two main cup competitions are well and truly over after we crashed out at the first hurdle in the FA Trophy – just as we did in the FA Cup.

A similar horror show to the one at Canvey saw us put to the sword by the Generals who, despite also being at Step 3 (in their case Southern League Premier Division South ) were far superior in every department.

Chesham put on a commanding display to make it a miserable afternoon for Andy Leese who spent a decade in their own dug-out where he had two memorable cup runs.

Not this time, though, and while we can now put all our energies into the league campaign, everyone connected with the club will be disappointed that there are no more special FA Cup or Trophy days to look forward to – or the revenue stream they provide.

Once again, understandably after three straight wins, Town were unchanged. With a strong bench and players coming back from injury, there was every hope of a good performance even though Chesham are flying high in their league.

Instead it was a chastening display, at times too one dimensional and easy to defend against and Andy was refreshingly honest about the performance as a whole afterwards.

Having said that, for the first 20 minutes we looked up for it as we took the game to Chesham, only to be caught cold when Jordan Edwards hit a low freekick through the wall against the run of play.

Try as we might to respond, we simply couldn’t get any change out of a disciplined and well organised unit who got back in numbers at the slightest hint of a threat – and were devastating on the counter.

Five minutes before halftime Edwards was almost on target again as his 35-yard piledriver crashed against the angle of our post and bar.

Right on halftime, the visitors doubled their lead at the worst possible time for us. After we failed to clear a corner, Jeanmal Prosper pounded on the loose ball and lashed it home.

Cue an immediate halftime substitution with Jake Cass replacing an out-of-sorts Wraynel Hercules but as we chased the game, the visitors almost made it three when Shaquille Hippolyte drilled the ball wide of an open goal.

Andre Coker’s neat finish on 53 minutes  – our first shot on target – so nearly put us back in the game, only to be ruled offside. And perhaps we knew it wouldn’t be our day when Cass somehow missed the target from four yards as he planted a header wide (pictured).

It was a chance we were left to rue as, on 73 minutes, Francis Jno-Baptiste’s pace took him surging into our box and he finished with aplomb.

Lyle Della-Verde came off the bench to see his 35-yard freekick tipped over the bar and from the resultant corner, a Sam Youngs snapshot flew wide.

But unfortunately Chesham weren’t finished yet.  Jno Baptiste too quick for Rian Bray who, with no defensive cover,  had little option but to pull him back inside the box.

Nathan McDonald brilliantly saved the penalty, only for T’Sharne Gallimore to force home the rebound. To  complete our misery, Rian became our latest player to be shown a straight red card.

“It was just a complete and utter disgrace but take nothing away from Chesham,” admitted a furious Andy Leese.

“A totally disrespectful performance, a complete capitulation. No fight, no application to the game plan. Performances since the Canvey Island debacle have been absolutely fine but it looks like we have ability to throw in that kind of performance.  I’ve got to wear it, they’ve got to wear it, and we’ve got to try and get things right for Bognor on Tuesday. That’s the challenge.”