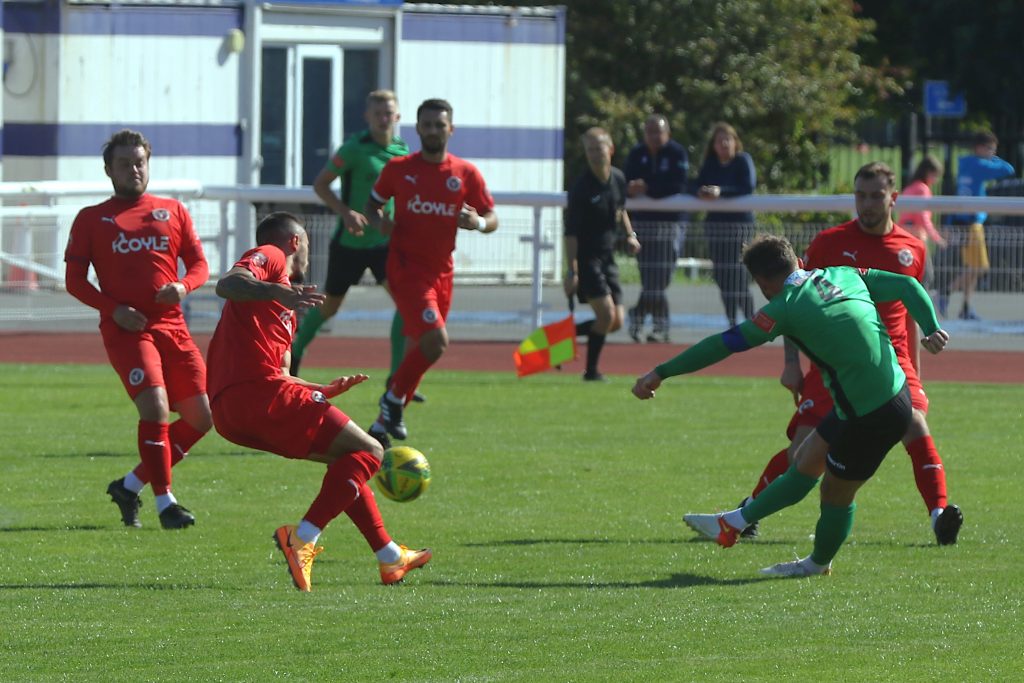 It may only have been a friendly but Saturday’s dominant display against fellow Step 3 opponents was another sign of things moving in the right direction in the wake of our cup humiliation at Canvey Island.

Building on our 4-0 demolition of Brightlingsea in midweek, there was an air of resolute determination about the way in which we went about our business – combined with some superb goals.

Thoughts are already  turning to taking revenge on Canvey in the league on Tuesday night after the tables were turned on the Gulls when they too were knocked out of the FA cup on Saturday, albeit in the second qualifying round.

We can certainly take confidence from Saturday’s showing as we blew Beaconsfield away in a rampant first half.

Sam Youngs opened the scoring after 10 minutes and Scott Thomas doubled the lead with his first ever goal for the Town,  an unstoppable 25-yard thunderbolt (pictured)

On the half hour, Youngs’ through ball found former St Albans winger Wreynell Hercules who drew the keeper before squaring to Adam Cunnington for number three. And right on halftime,  Andre Coker, clearly relishing playing again, made it four.

A flurry of substitutions ensued including the welcome return of Josh Urquhart — back in a Town shirt after his lengthy injury layoff.

Beaconsfield pulled one back but with time almost up Lyle Della Verde – who now misses three games because of his dismissal at Brightlingsea – exchanged passes with Kian Wilkes and unleashed another of his trademark screamers.