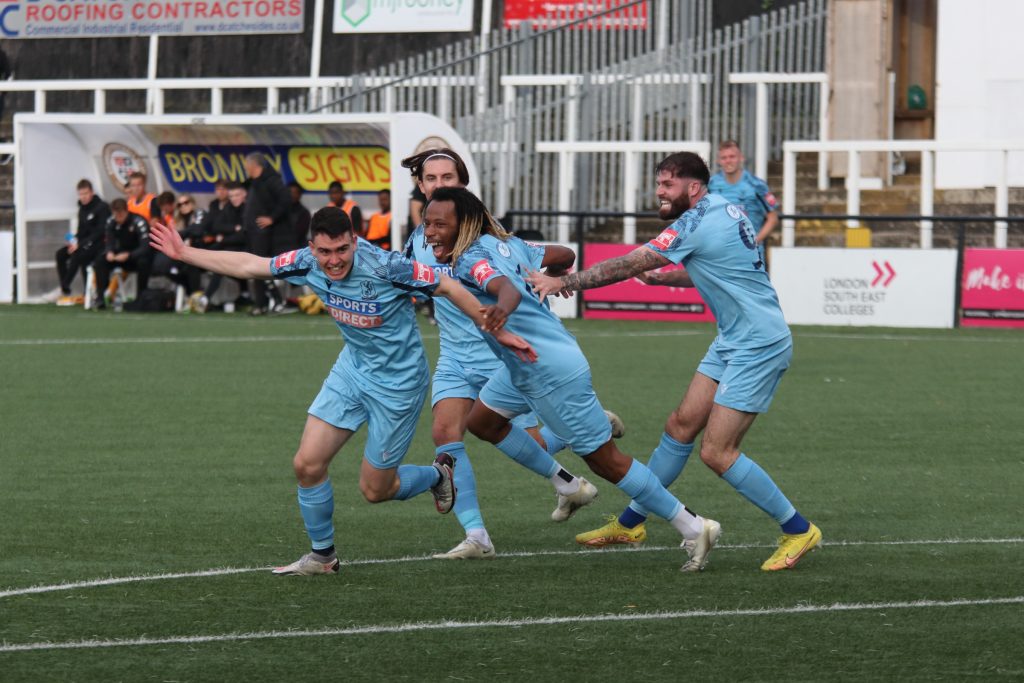 Frustration seemed to be the byword amongst the Town players after a fast-paced encounter which, on another day, we might have won.

The celebration among the Cray team at the final whistle said much about how they felt about sharing the points in a tight game that saw us drop to fifth.

With the teams in and around us – most of whom have played fewer games — picking up three points, there was a sense of disappointment after we had taken the lead through Marcus Wyllie’s first competitive goal for the club, only to be pegged back shortly afterwards.

But this was a big improvement following the Lewes debacle, particularly in terms of players covering each other all over the pitch and the amount of the possession we carved out.

The management team made three changes from the Lewes game but kept the defence in tact and to be fair, for large periods of the game we were relatively untroubled.

This fixture so often produces a goal fest but not this time, with defences on top for much of the game.

On 19 minutes, Jake Cass, who chased lost causes all afternoon and was a constant threat, let fly from 25 yards, narrowly missing the target.

Cray almost took advantage of a rare James Richmond slipup, only for Nathan McDonald to save with his legs.

Nathan produced an even bigger stop to keep out a point-blank Jalen Jones header from a freekick but in a half of few clearcut chances, Sam Youngs almost broke the deadlock on the stroke of halftime as he held off two defenders before swivelling and shooting just wide.

Four minutes into the second period, we took the lead as Wyllie pounced on a weak defensive header just outside the Cray box and strode forward to fire a delicious right-foot effort into the corner sparking huge celebrations (pictured).

Cass almost made it 2-0 but couldn’t quite keep control before Cray hit back.

Nyren Clunis had already gone close to an equaliser after being put through by skillful teenager Ben Krauhaus when the ball was played into the path of Dan Bassett and his low shot seemed to squirm under Nathan’s body.

The home side briefly threatened to turn things round as they upped their game but we held firm and finished the stronger with three pairs of fresh legs on the pitch.

Cass and Wyllie combined to set up ex-Wand Andre Coker down the left but his shot lacked sufficient power. And in the dying moments, Cass so nearly won it with an audacious piece of skill and strength that was kept out by Rowley.

Neutral observers will feel the outcome was just about right but perhaps looking back it was a game from which we might easily have come out on top.

“Much, much better performance from us today… a much different performance than we’d given the previous two Saturdays”, said Andy Leese. “We had to deal with Cray and the way they play, which I felt we did really well… just a little bit disappointed we didn’t capitalise – we created lots of chances.”