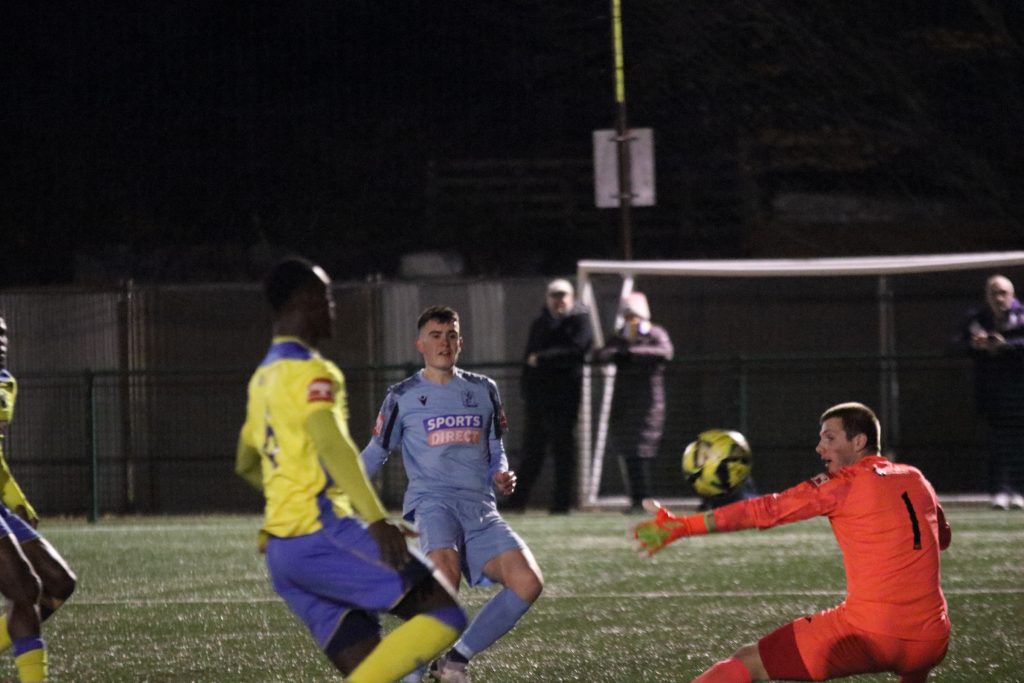 Enfield Town exited yet another cup competition on Tuesday night, this time via the curse of penalties in the Velocity Trophy 4th round, leaving us to concentrate on the league for the rest of the season.

But the players can feel a touch unlucky after dominating our nearby opponents for large spells of the game, not helped by some questionable officiating.

In the end it came down to profligacy in front of goal and two of our spotkick takers missing the target, reminiscent of several past shootout disappointments.

Except for the absence of Sam Youngs, still recovering from the knock he took at Carshalton, we fielded virtually a full side against opponents missing three regular defenders.

And apart from a dangerous spell just after they equalised for 1-1, it was Town who imposed their game on the opposition in a tournament we had genuine hope of winning.

On another day Jake Cass may have had a hattrick but left his scoring boots at home but he wasn’t the only one guilty of a string of near-misses.

It all started so well with a composed finish after 13 minutes by Marcus Wyllie (pictured) who is rapidly becoming a fans’ favourite.

It was almost two when the Haringey keeper flapped at a Joe Payne long throw but after struggling to keep the ball, the hosts hit us with a sucker punch seven minutes before the interval.

From an Enfield corner, they surged up the other end  in a three-man move that beat us for pace, Anthony Mendy providing the finish.

Suddenly we found ourselves on the back foot, Nathan McDonald somehow keeping out a close-range effort from Ou Durojaiye that slammed into his face.

It was Town who again began the second half in the ascendancy, creating chances as we pushed Haringey back, the best falling to Cass, whose header inexplicably missed the target.

Jake deserved a goal for all his usual tireless running off the ball but on 67 minutes we fell behind. Juevan Spencer’s driving run was halted in its tracks and as Haringey  burst into the space left vacant behind him, Kylan Hinds made us pay.

For some reason, the officials didn’t spot a blatant off the ball challenge on Joe Payne that might well have resulted in a red card.

As the clock ticked towards penalties, Lyle Della-Verde hit the post, Cass couldn’t quite convert the rebound, and substitutes Wraynal Hercules and Andrew Coker, the latter with almost the last kick of the 90,  went agonisingly close.

And so to spotkicks with Haringey netting four of their five – including  one fortuitously retaken after originally being saved by Nathan who was bizarrely adjudged to have been off his line —  and both Della- Verde and Coker missing the target for Town.

It rounded off a what-might-have-been evening with only the Middlesex Senior Cup left in terms of cup competitions.

“A bitterly disappointing night,” said Andy Leese. “We had enough chances to win two games and it was frustrating to watch. The penalty shootout saw us continue to miss the target.

“We have to regroup now and move on to the important league games we have. We only have ourselves to blame for exiting the League Cup.”