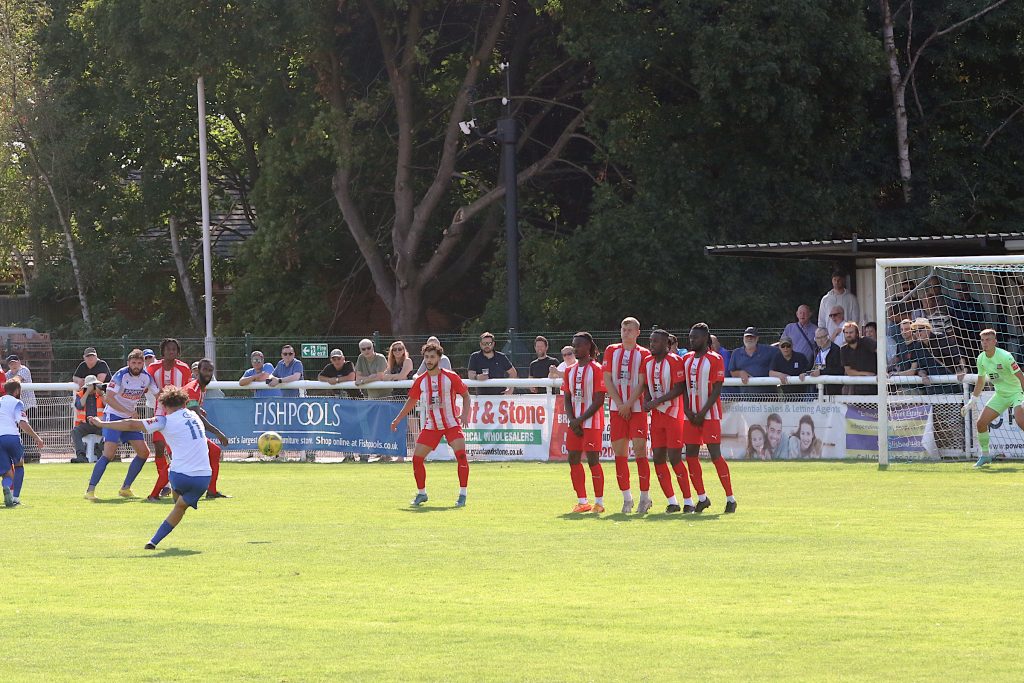 A much-needed first win of the season was achieved courtesy of two set pieces – one in each half – and some solid defending against a Bowers team who have changed their entire playing squad this season.

Town may be some way off last season’s playoff form but this was the ideal boost ahead of Monday’s local derby at table-topping Potters Bar.

Despite plenty of endeavour, some neat interplay and a couple of spells of pressure, Bowers didn’t unnecessarily trouble us and had more bookings, six in all, than they did shots.

Nevertheless we hardly set the world alight as an attacking force either in what was often a scrappy game.

Town lined up without Marcus Wyllie who was rested as a result of slight hamstring issue.

Jake Cass, who worked tirelessly all game,  led the line and was almost on the end of a Lyle Della-Verde pass early doors, the ball just running on to the keeper.

Twice in the first 20 minutes, Della-Verde whipped in dangerous freekicks to the back post, both of them eluding Town’s forwards.

But it was third time lucky on 28 minutes from a slightly more favourable position outside the box. Cass was bundled over and Lyle produced another of those trademark left-foot beauties that flew past Kie Plumley (pictured)

Bowers tried to respond and Freddy Moncur had a goalbound shot blocked but with James Richmond putting in another eye-catching display in central defence, the visitors’ moves came to nothing.

In fact only a timely interception to thwart Cass prevented Town doubling their lead on the stroke of halftime.

Bilal Sayoud’s header forced a low save from Plumley who minutes later produced an even better stop, also from Bilal, saving with his legs after Town’s best move of the afternoon.

In between, Bowers had two decent chances but Nathan McDonald generally had little work to do such was the protection he received from the defence, who switched to a back three for the final period of the game.

Bowers never looked out of contention, however, and it was with some relief when the game was made safe on 85 minutes as Cass lost his marker at a Lewis Taaffe  corner and guided his header into the ground and up into the net.

The one disappointment for Town was having fullback Ryan Kirwan sent off for a second yellow literally seconds from the end, theoretically meaning he will miss Saturday’s tricky FA cup tie at Canvey Island.

Yet it is a game Ryan was unavailable for anyway.

“I’m pleased with a clean sheet following on from last Sunday but in attacking sense we weren’t at our best today, not at our most fluid,”  said Andy Leese.

“Really pleased with the outcome and our defending, such as it was, just a little disappointed with our attacking play. But then whatever way the goals come, I’d take another 20 of those results today.”