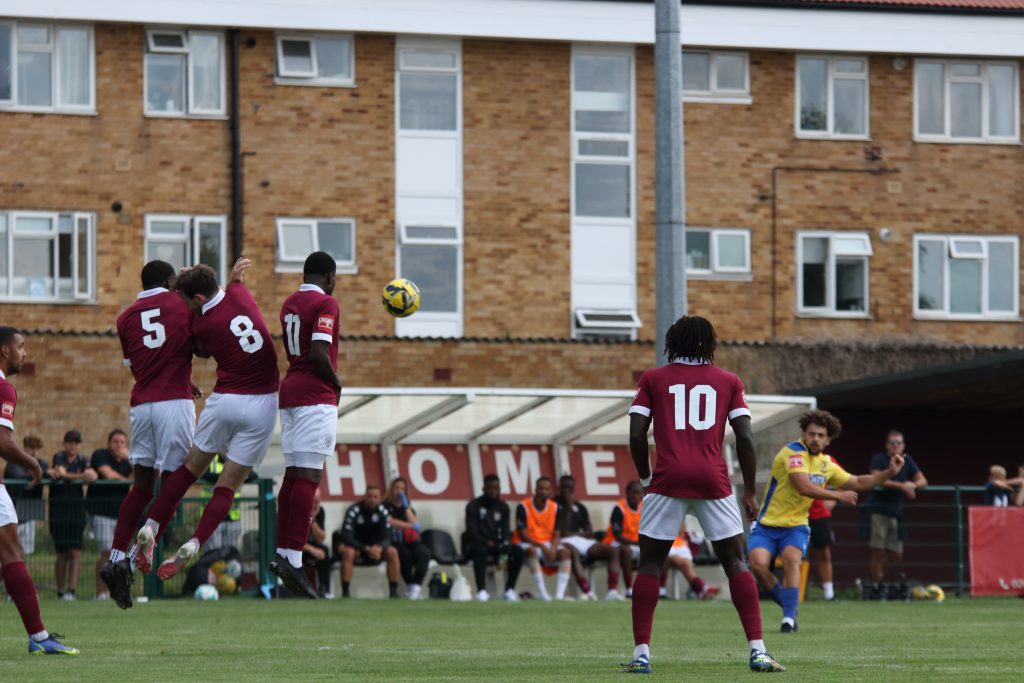 There sometimes ain’t no justice. Despite our best performance of the season to date, we came away with no points on Bank Holiday Monday and scant reward against our local rivals after dominating the second half.

Potters Bar may be top of the league but got lucky with a late winner on a day when our approach play and running off the ball deserved more.

The Scholars may argue they hit the post but with a 3-4-1-2 system that for large parts negated their physicality, we were left ruing what might have been and now have to pick ourselves up for the all-important FA Cup clash at Canvey Island on Saturday.

In the first meaningful attack of the game, the skillfull Quentin Monville, who will be a handful for most opposition teams this season, burst through and  saw his shot flash wide of our goal. Then Bar’s Kasim Aidoo was booked for diving when claiming a spotkick.

Once we absorbed early pressure, we settled down and grabbed the lead on 13 minutes with, yet again, another peach of a freekick from specialist Lyle Della-Verde.

If Saturday’s strike against Bowers was a thing of beauty, this was 30 yards out and even more sweetly struck (pictured). The keeper got a hand to it but only succeeded in pushing it on to a post and into the net.

Unfortunately the lead lasted a mere seven minutes as Mo Kamara, Bar’s midfield dangerman, was given space to line up a shot and unleashed an unstoppable drive into the top right corner.

As  the action began to get tasty, as happens in derby games,  it all went off in front of the dugouts as players on both teams waded in. Luckily the referee gained control of the situation.

As the half progressed, a great freekick by Bilal Sayoud, who enjoyed a fine afternoon, almost produced dividends as Adam Cunnington connected  at the back post but only succeeded in sending the ball across goal.

Just before the interval, Rian Bray handled whilst struggling to deal with a hanging ball but the result was rightly yellow rather than red despite howls of Potters Bar protests.

On 55 minutes we got into something of mess defensively and were fortunate to see Joe Boachie’s angled shot come back of a post.

But from then on, it was one-way traffic as we pushed the hosts back and carved out a string of corners and half-chances.

A sweeping Town move ended with Scholars defence just getting in a block. Then a 35-yard Della-Verde freekick cannoned off the wall.

Our one big chance of the half came on 73 minutes when Cunnington dived full length to meet a Lewis Taaffe cross but steered his header narrowly wide.

The introduction of Marcus Wyllie and Andre Coker provided further hope of a Town breakthrough only for the hosts, who had  defended stoutly, to snatch victory with two minutes left, much to the disappointment of Town fans who made up the majority of the 531 attendance.

Town failed to adequately clear a throw-in and when the ball fell to Monville on the edge of the box, he took a touch and fired a shot into the bottom right hand corner via a deflection to undo all our good work.

“A sucker punch really,” said manager Andy Leese. “I thought we set up really well and defended really well in an even first half..”

“But I thought second half we came out and dominated proceedings.  There may have been few clearcut chances but what chances there were fell for us.”

“It’s massively disappointing, we certainly didn’t deserve to lose. We were missing one or two but I’m not going to complain about that – we’ve good a squad with plenty of depth. We’ve got to dust ourselves down now, focus on the FA Cup on Saturday and then start getting some points on the board as quickly as we can. If we play like we did against Potters Bar, I think we’ll be fine.”