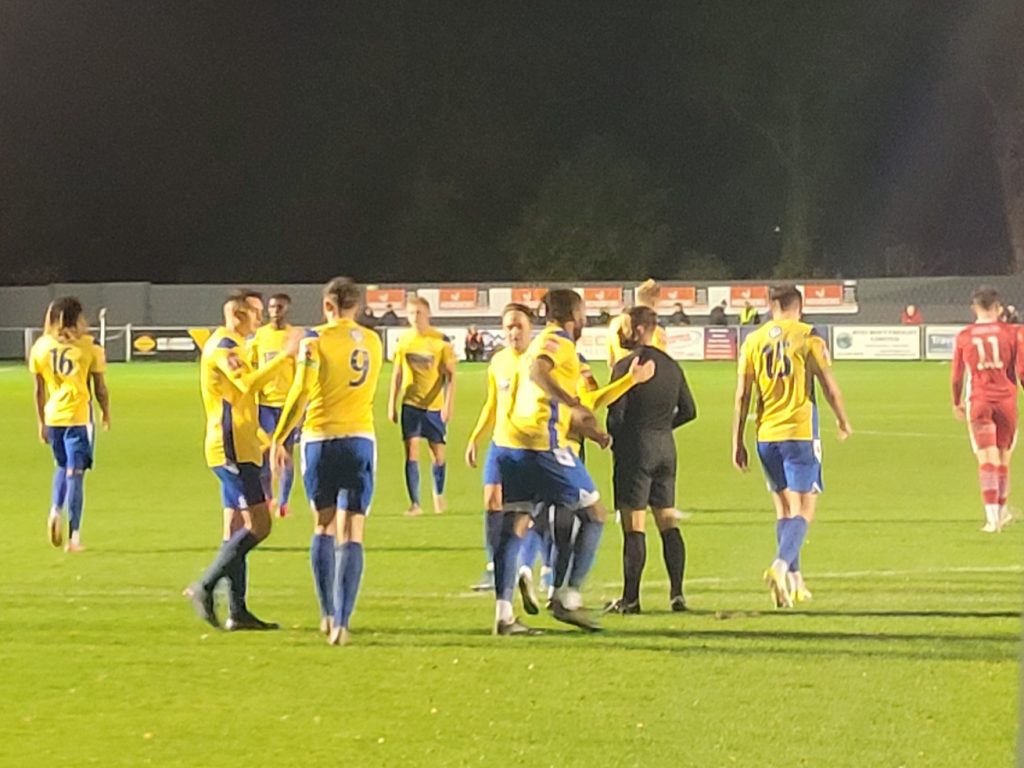 Enfield Town are into the next round of the Velocity Trophy after a dominant first half display set them on their way to a 2-1 victory over Felixstowe & Walton United.

Downpours which had hit the Suffolk coast earlier in the day had subsided by kickoff, making for a slick, moist pitch at Delwood Avenue – with Town playing some neat football throughout and perhaps a shade unfortunate not to register more than the two goals they did. When this slick build-up was brought to an unceremonious halt down the left flank after a shove on Marcus Wyllie 12 minutes in, Enfield threatened as Lewis Taaffe’s inswinging free kick was glanced goalwards by Wyllie, but gathered by goalie Callum Robinson.

Two minutes later, the hosts would eventually be undone from a similar position. This time Taaffe sent a low shot bouncing against the base of the post, though the loose ball was smartly recycled by James Dayton, whose clipped cross was guided superbly into the far corner by Lewis Knight on the volley – the centre-back’s third goal in his last four.

Town’s tails were firmly up now, looking menacing in the wide areas, and almost immediately Dayton flighted a similar cross to the back stick, though Wraynel Hercules sliced over the crossbar. Off the ball, the visitors’ pressing was also excellent – with the defence, as well as a midfield which included debutant Anthony Wordsworth, sweeping up well when called upon. Just shy of the interval, Knight was withdrawn out of precaution after going down in discomfort, making way for another new arrival in centre-half Joshua Okotcha.

Not that Town lacked a threat when the goalscorer departed. On the 45-minute mark, Jake Cass’ looping header across goal was retrieved by Wyllie, who shifted and drilled a finish beyond Robinson and in via a defender to double the Towners’ advantage. Felixstowe were somewhat fortunate to go into the break just the two down as an apparent trip in the area on Wyllie, who attempted to stay on his feet, was inexplicably waved away by the officials.

The second half began in frantic fashion as the industrious Taaffe advanced from midfield and twice was unlucky not to find the target, again striking the foot of the post before forcing an excellent two-handed stop to Robinson’s left on the edge of the area. A fleet-footed counter attack followed minutes later, started by Dequane Wilson-Braithwaite at his own corner flag, and very nearly ending in Taaffe converting from Wraynel Hercules’ square ball. Wyllie was cynically brought down after bearing down on goal, yet for all their graft, Town were unable to find a third. A series of substitutes would follow, with Sam Youngs brought on in an advanced role after Cass and Wyllie had both been taken off.

Mere moments later and the hosts pulled one back seemingly out of the blue, as a long ball bounced straight through the centre and was lofted over Nathan McDonald by Samuel Ford. McDonald was alert to thwart Ford again shortly after, but now the mood had shifted, with Town having to repel several Seasiders set pieces. With four minutes of injury time, ‘keeper Robinson was sent upfield in hope, but it was Joshua Hitter’s late, curling free kick which was the closest the home side came to snatching an equaliser; McDonald parrying clear to secure Town’s passage into Round 4, and an away tie at Haringey Borough in two weeks’ time.

“A difficult game; they’re playing well. I was really pleased with the first half, I thought we were excellent”, said Andy Leese.

“We got the measure of them, and got two good goals to put us in a winning position. There were a couple of enforced changes as well [Knight; Dayton] but it didn’t really affect us.” “Second half I think we started really well, though the amount of changes we made caused us to stutter a bit. But then last 15 with all those changes we saw it out well. It was all about getting a result tonight and that’s what we did.”