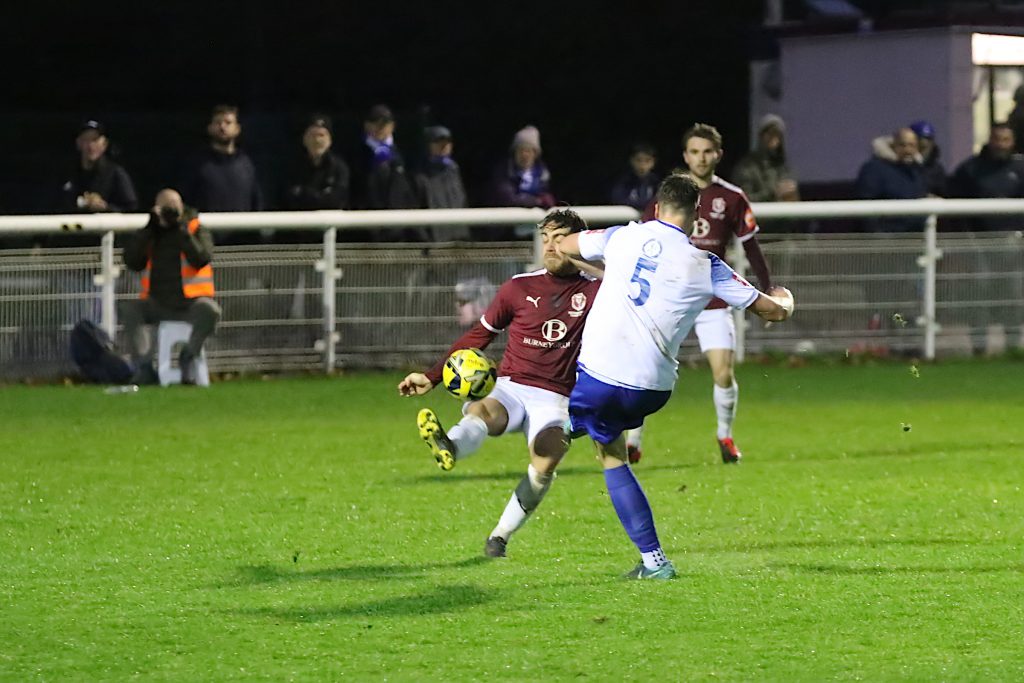 (Partially rewritten and edited throughout by Andrew Warshaw)

It was always going to take something special to settle a tight game and Town managed to find a way through late on to make it back-to-back wins.

There may have not been many fireworks but for an unlikely hero, it certainly was a Nov 5 to remember with a sparkling winner.

Hastings substitute Chinedu McKenzie had just seen his angled shot come back off the post when, in virtually the very next move, recent arrival Lewis Knight moved up from the back to produce a 25-yard thunderbolt (pictured) and take the points for Town after 87 minutes, in the process moving us up to fourth.

The first chance fell to Andrew Coker , who was put through on goal, but his shot was scuffed and cleared by the Hastings defence.

A half full of long throws by each team’s specialist produced a string of half-chances. Enfield skipper Scott Thomas, in his 100th appearance for the club, set up arguably set up the best chance of an attritional opening period, Della-Verde drilling the ball just wide on the stroke of halftime while James Richmond saw his effort fly over.

Despite a few bright cameos, it was a half to forget as neither keeper was really tested.

Town picked up some momentum at the start of the second half as they looked to break the deadlock, new signing Hamilton Antonio showing his effectiveness in support of Sam Youngs.

A lovely move saw Della Verde play in the overlapping Jeuvan Spencer but his cross was put behind for a corner by Louis Rogers.

Three minutes later, another corner whipped in by Della-Verde was headed goalwards by Richmond only for Rogers to pull off a magnificent save.

As the rain started to lash down on an increasingly soggy surface, control became difficult.

Jake Cass was inches away from converting a right-wing cross but suddenly Hastings, well drilled despite missing three players, started to believe they could win it.

On came supersub McKenzie with 20 minutes to go and he threatened to turn the game.

Put through down the left he shot narrowly wide, then was presented with an even better chance in the 84th minute but hit the post from six yards out.

Those  chances came back to haunt Hastings  as a long throw was cleared, only to fall to Knight who, with a striker’s instinct,  hit a beauty into the top corner. Shortly afterwards, Hastings keeper Louis Rogers was lucky to stay on the pitch after pole-axing Wraynel Hercules.

“I couldn’t really see where a goal was going to come from,” said Andy Leese afterwards. “We couldn’t really find a way through so I’m absolutely delighted. I didn’t really expect to sign a centrehalf who has now got two in three games! The composure to bring the ball down and bend it in like that was nothing short of incredible.”

A Knight to remember, you could say, and a big three points.