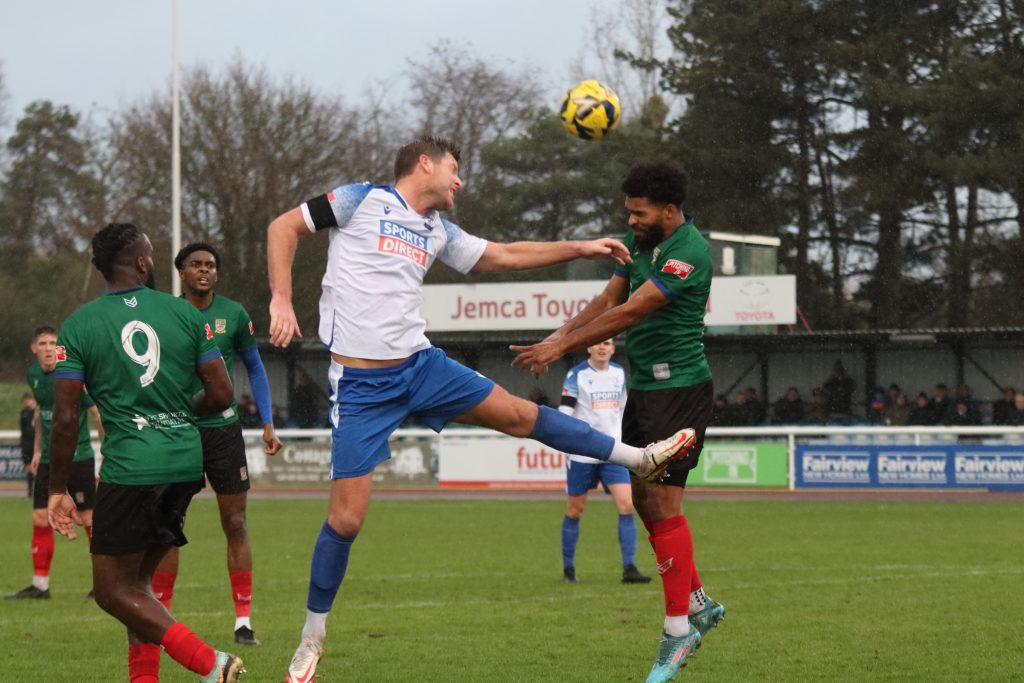 A great opportunity missed is how manager Andy Leese described Saturday’s result – and few would disagree.

Having secured those back-to-back derby wins over the holiday period and with teams in and around us all dropping points apart from Hornchurch, victory could have pushed us even further up the table.

Instead we allowed visitors who hadn’t won  in 15 away games to claim victory despite a second-half rally that on another day might well have yielded a positive outcome.

Before kick-off, as the sun made a brief appearance on a generally wet afternoon,  a minute’s applause took place in memory of club life vice-president Keith Wortley who sadly passed away recently.

With Josh Hill having returned to Dulwich after his loan spell (he has since moved on to Hemel Hempstead) and James Richmond and Lewis Knight both serving the last of their respective three-game suspensions, the management team was forced into yet another central defensive partnership, Anthony Wordsmith coming in alongside Dequane Wilson- Braithwaite.

Things didn’t go much better in terms of personnel because by halftime, both Anthony and James Dayton were back in the dugout having been forced off through injury.

To make matters worse, Town  were a goal down as a result of Great Evans’s freekick which skimmed off the wet surface and beat Nathan McDonald who appeared to help the ball over the line.

Evans had already fluffed the best chance of the half when he was through on goal but shot straight at Nathan.

There is little doubt that Kingstonian, for whom midfielder O’Shane Stewart and striker Joe Boachie were especially eye-catching, deserved their interval lead.

But having created very little in a flat first half, Town came out with renewed urgency and intensity.

Sam Youngs and Lewis Taaffe both went close while Marcus Wyllie’s cross from Chez Isaac’s chipped ball just had too much pace for Adam Cunnington who again led the line relentlessly (pictured).

After weathering a 20-minute Enfield spell, Kingstonian twice missed a golden chance to put the game to bed on the counter.

Thereafter they were fortunate not to pay the price as they rode their luck in the final quarter.

Not once, not twice but three times we hit the woodwork, first through Marcus Wyllie’s angled left-foot drive against the far post, then Jueven Spencer’s 30-yard thunderbolt and finally, deep into eight minutes of stoppage time, through Lewis Taaffe.

In between, Kingstonian skipper Rob Tolfrey tipped over a rasping Youngs effort but in truth Tolfrey should have been tested far more often  over the 90 minutes.

“I’m as upset as I’ve  been all season today,” said Andy. “We got what we deserved.  It was a great opportunity had we applied ourselves properly but the first half was way too passive.

“One or two players today clearly weren’t fit. We’ve also got as number missing and it clearly caught up with us. It’s a real blow, a disappointing day all round but good teams bounce back starting on Tuesday night at Northwood in the Middlesex Senior Cup.”