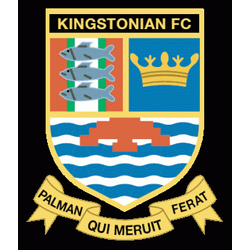 After two superb back-to-back wins over the holiday period without key players, we aim to make it three a row tomorrow, Saturday, when we entertain  Kingstonian at the QEII Stadium, kick-off 3pm.

Back in August we drew 0-0 with the K’s at their latest temporary home of Tooting & Mitcham.

Perhaps unsurprisingly because of their situation the K’s have had a challenging season to date and are only one point above the drop zone in 18th place with 19 points from 21 games.

Recent results have not helped – not least failure to win in 15 away games – though they suggest K’s have come close to taking points off clubs in the promotion race.

They only lost by the odd goal against both Cray and Carshalton and picked up a 0-0 draw away at Aveley.

Tickets for all our January home games can be purchased here

After our confidence-boosting derby wins, we are now in fourth place, only four points behind leaders Hornchurch and with games in hand over other playoff contenders.

It promises to be an exciting second half of the season with every point proving invaluable and tomorrow, despite us still being without James Richmond and Lewis Knight who are serving the last in their three-match bans, Anthony Wordsworth is available for selection again following his two-match suspension.

Next Tuesday, Jan 10, we visit Northwood, South Central League leaders, in the last eight of the Middlesex Senior Cup, 7.45 kickoff.

It’s a trophy we’d very much like to win and your support will be much appreciated. Address is  Chestnut Avenue, Northwood, HA6 1HR