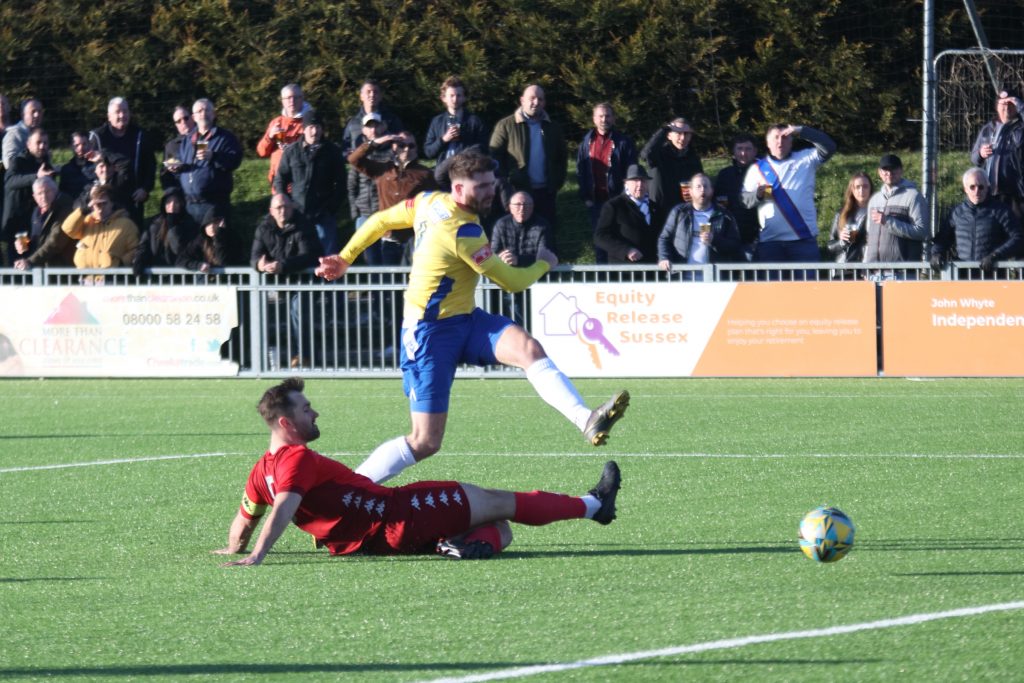 Sometimes you just have to hold your hands up and admit you were beaten by the better side.

So it was on Saturday when, despite a formation designed to match our high-flying opponents, we were well beaten by the runaway league leaders on the south coast.

A healthy Town following in a bumper crowd of over 1,500 did their best to spur the team on but in truth we were never really in the game.

Yet despite having now lost three in a row and played more games than most of our playoff rivals, we are still very much in the hunt for a top-5 spot, with many of the other contenders having to play each other before the end of the season.

Basically nothing is settled as of now but we do need to bounce back next Saturday against East Thurrock, who are fighting to stay up,  to regain momentum before the mother of all six-pointers against Hornchurch the following weekend.

Worthing flew out of the blocks and caught us napping after just eight minutes when a quick throw found man-of—the-match Davide Rodari and his volleyed cross was headed home by Jasper Pattenden.

The game was billed as a clash between the league’s two top scorers, Oliver Pearce and our own Mo Faal with 60 goals between them.

But both had a quiet afternoon by their own high standards and instead it was Rodari, on loan from Crawley, who stole the show.

Jake Cass had our best chance of the opening half when he skimmed the top of the bar from 30 yards.

But Worthing always looked the more threatening side and had two more golden chances to extend their lead, one of which was cut out by a last-ditch Rian Bray interception.

Although we re-emerged with more urgency, we continued to struggle to deal with Worthing’s pass-and-move style in contrast to our more direct approach and on 54 minutes we fell further behind.

A quick break down our right ended with Rodari arriving at the back post to rifle the ball home from James Beresford’s pinpoint  cross.

And it was Rodari again who finished off the scoring with the goal of the game, a side-foot finish off the post on 65 minutes.

A hugely disappointing afternoon in the sunshine was complete when Percy Kiangebeni, who had already been booked, was shown what appeared to be a straight red for a body challenge on the edge of the box. Because it was not deemed as violent conduct, Percy is expected to only miss one game.

All in all not many positives to take away but let’s not get too downhearted.

There will still be several twists and turns and victory against East Thurrock, when girls and ladies will have free entry to celebrate International women’s day, will keep us very much in the mix.