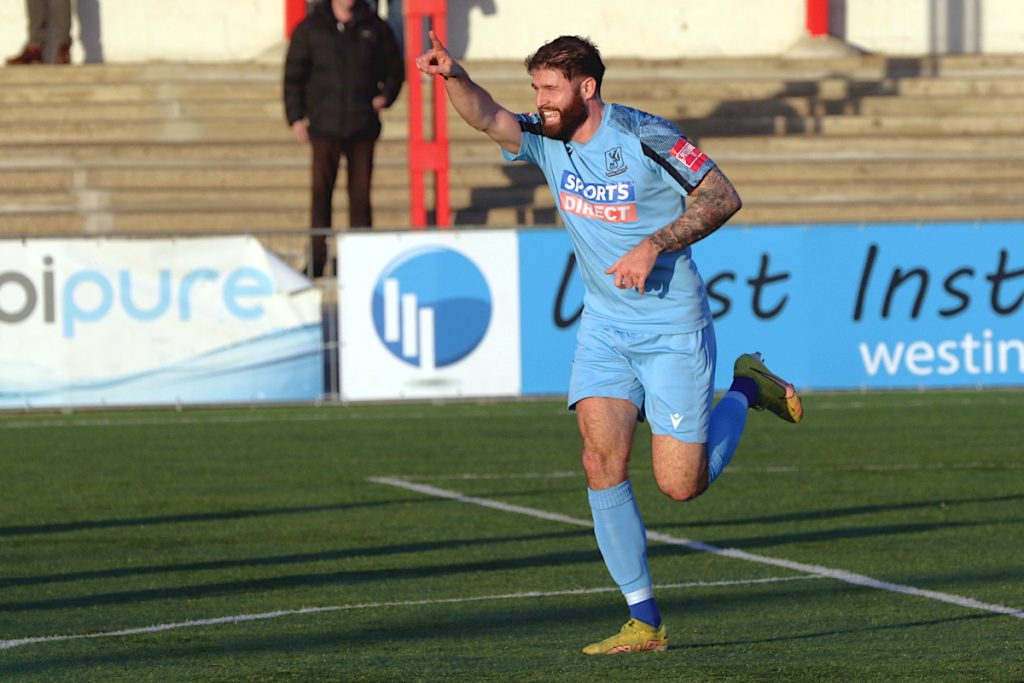 You might assume that Jake would have had a special incentive to do well against his old club on Saturday.

Yet, despite the unfortunate way in which he left Stortford to join the Town just under a year ago, Jake was insistent that his penultimate home game before he takes a short break was like any other fixture. “It’s true I left under deeply controversial circumstances but it is what it is,” said Enfield’s number nine with commendable frankness. “I have not lost any sleep over them and probably vice-versa.”

“Things sometimes don’t work out in football. The only incentive I have to do well against them is the fact that they are in the playoff positions with us.”

In mid-December, straight after the Hornchurch game, Jake is due to fly off for a long-planned vacation, missing several vital fixtures, though Town’s fortunes during his time away will not be far from his mind. “It’s been a very tough year for me personally for all kinds of reasons,” Jake revealed. “When we lost the playoff semi-final, I was heartbroken.”

“I knew I’d miss the whole of pre-season because I have to travel a lot due to work, and then four weeks at Christmas. I told the gaffer that if my level of commitment was not acceptable, I’d completely understand.”

“We’re a big club with a good level of football and the last thing I wanted to do, which is still very much the case, is take liberties. I was very transparent with my circumstances.”

It’s precisely because of his love for Town that Jake expressed that kind of honesty. It’s all about the team. “I know the situation is not ideal. The manager has to do what he has do. If I can’t get back in the team and have to sit on the bench, I just have to accept it. I’m either going to play for Enfield or no-one.”

That’s some statement but Jake talks like he means it. “When I come back in January, I think I’ll be in great shape. I’m only 29 and feel I’ve still got a lot to give.”

“I love everything about Enfield Town. I’ve played non-league football for over a decade and this is by far one of my favourite dressing rooms and by far and away the best fans. There is no other walk of life where you can replicate that level of appreciation.”

It’s important to note that Jake has also become a member of the club as well as one of its key performers. “I just love the community concept of the club, the unique aspect in terms of no barrier between players and fans. Whether or not I’d been selected regularly this season I still would have become a member. It’s certainly 20 quid well spent.”

“Great club, great cause, great people and long may it last. I’m just pleased to do my bit.”

And looking ahead? “With the players we’ve brought in, I genuinely believe we’re in a better place than we were last season. The spine of the team is strong, so onwards and upwards.”

This piece originally appeared in the Enfield Town FC Matchday Programme. Pick up your copy on home matchdays, or subscribe to GoToTown to receive each edition as a digital or hard copy.