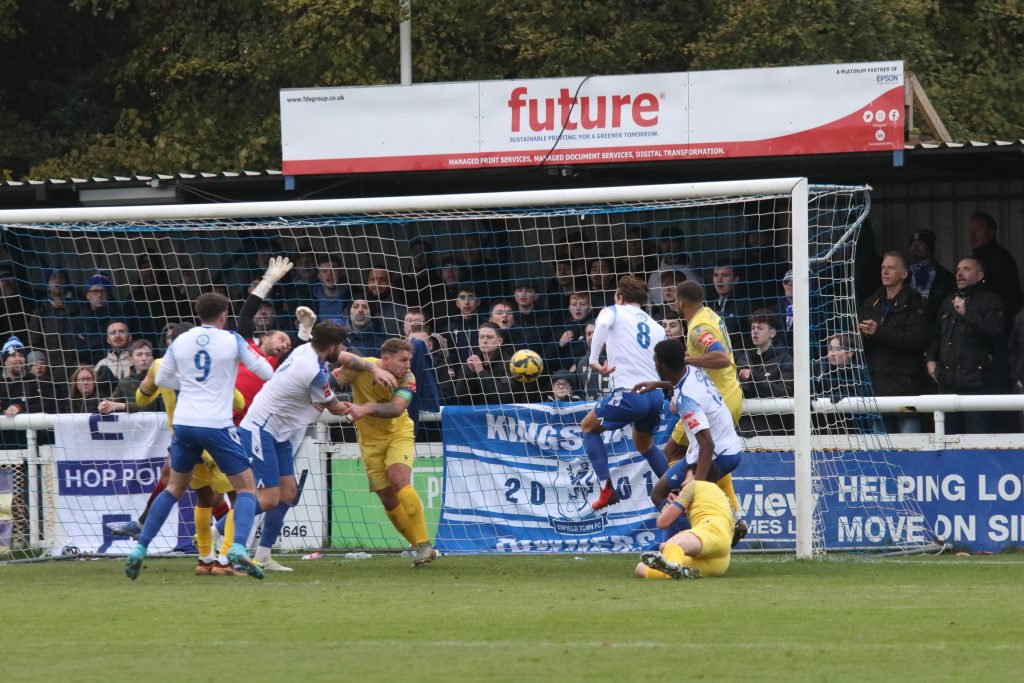 Bishop’s Stortford earned a fourth consecutive win against play-off rivals Enfield Town, a run stretching back to March 2020, and leapfrogged them into third place in the table whilst Town dropped to sixth.

The opening period was a somewhat subdued affair, with the visitors having spells of possession and, not for the first time this season, Enfield found it difficult to get a foothold in the game in the opening 45 minutes.

David Olufemi had a shot blocked, and Nathan McDonald was becoming increasingly busy, firstly cutting out a dangerous low cross from Donell Thomas and then dealing with a free kick from the eye-catching Darren Foxley. Soon afterwards Frankie Merrifield fired just wide from Foxley’s square pass while, at the other end, Jake Cass was way off target with his left foot.

After Foxley had forced McDonald into another save, Cass went on a great run down the left, but his low ball across the edge of the six-yard box just eluded Adam Cunnington.  Then on 37 minutes, the lively Donell Thomas found space on the edge of the home box and fired low past McDonald’s outstretched right hand for what turned out to be the winning goal.

A couple of minutes into the second half, Cass was played through but, as he elected to flick the ball past the onrushing keeper Jack Giddens rather than take an early shot, the ball was cleared by a covering defender from near the goal line and the chance was gone. Then around the hour mark, a slow-burning touch paper was ignited by a major skirmish in the centre circle.  Once the dust had settled, the officials opted to red card Lewis Knight and James Richmond for the hosts and Harry Beadle for the visitors, despite there being a number of other players heavily involved in the melee.

Another Foxley free kick was saved by McDonald, but Town showed great spirit for the remainder of the half despite their numerical disadvantage.  In the 71st minute, Cass tested Giddens with a crisp volley which was tipped over. From the ensuing corner Giddens then made an even better stop from the same player’s bullet-header from close range. Many Town fans felt aggrieved a few minutes later when a well-flighted Scott Thomas free kick from the left drifted over Giddens’ head and nestled in the back of the net, but an infringement had been spotted by referee Benjamin Bowles.

Stortford saw out the rest of the game with few alarms, although as McDonald came up for a late corner and a cluster of Town heads connected with the ball, it dropped agonisingly wide of the post from a Town perspective just as the referee blew for full time to end a game which the Blues had managed well on the day.  Town’s misery was compounded when, in addition to manager Andy Leese during the second half, referee Bowles also red-carded Anthony Wordsworth in the tunnel after the match had ended.

“On the balance of the first half, it wasn’t good enough. The second half probably, unfortunately, has to be consigned to the bin”, said Andy Leese. “The consequences of today are pretty dramatic for us. We’ve huffed and puffed and created two or three chances when we’ve gone down to nine men; at that point you have to salvage whatever you can from the wreckage … but not a good day all round.”