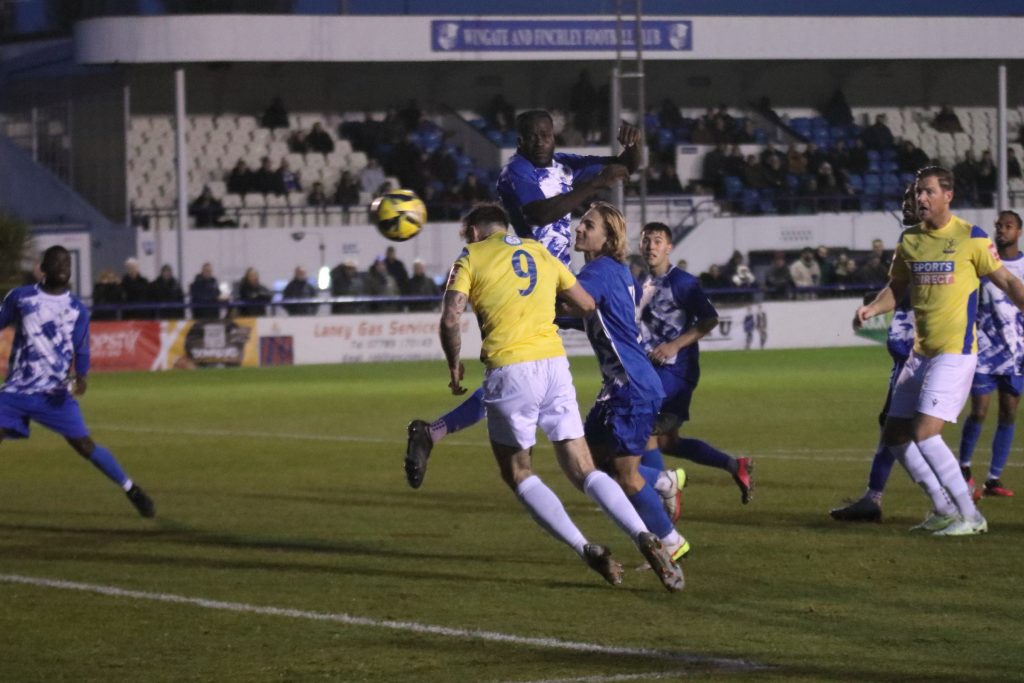 A solid workmanlike performance earned three well-earned points at our lowly neighbours on Saturday to set us up for a mouth-watering December against all the other leading sides in and around us.

Lewis Knight (yes, him again!) struck with our first attack of the game and it was a lead we never relinquished, doubling it halfway through the second half to send us up to fourth – leapfrogging Bishop’s Stortford, our next opponents.

With James Richmond having to cry off ill and Sam Youngs only starting training again this coming week, Dequane Wilson-Braithwaite seamlessly slotted into the back four against opponents who were neat and tidy but lacked authority in the final third.

With a minute gone on the clock, a Town corner was half-cleared and Marcus Wyllie’s deflected cross looped up in the air for Knight to head home.

Wingate replied with Daniel Emovon’s snapshot that flew over the bar and rest of the half was fairly even, Wingate carving out a succession of corners but Town going closest – first through a spectacular Jake Cass volley, then when Wyllie dragged a low angled shot just wide.

Wingate almost drew level when former Towner Dernell Wynter lashed a shot over the bar and there was cause for concern when man of the match Juevan Spencer needed lengthy treatment following a late challenge by Emmanuel Yeboah who, bizarrely, escaped a booking.

Shortly afterwards a melee ensued halfway inside the Wingate half following a clash between Adam Cunnington and Emovon.

The result was a 65th minute freekick to Town, curled in by Lyle Della-Verde for Cass — who started his career at W and F as a youth player – to rise above the home defence and bury a powerful header (pictured).

Thomas Stagg had a sniff of chance to draw Wingate level but was offside anyway and the hosts lost heart as we played out the final quarter with relative ease.